On Wednesday, New York City unveiled a new surveillance system powered by Microsoft that would provide near-real-time analysis of camera footage across the city. In its press release, the City boasts that the system features “the latest crime prevention and counterterrorism technology.” The security-minded among us may cheer this development as providing heightened protections against terrorism and other planned acts of violence, but for those of us who are more interested in privacy, this announcement reeks of “Big Brother.” 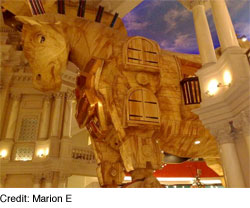 On Monday, Gabriel Saldana offered some social media privacy tips for stalking victims. His advice about quitting Facebook is on the mark, and not just for people victimized by stalkers. While Facebook is a popular gateway into a virtual world of friends, status updates, and likes, it may also serve as a social engineering Trojan horse for those seeking to do you harm.

Consider the following security questions that banks and other financial institutions often use to safeguard your account?