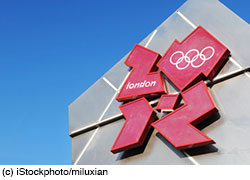 In one week, the opening ceremony at the London 2012 Olympics will mark the start of the summer games. Congress has embraced the Olympic spirit in the only way it knows how: legislation. Sponsored by Senator Robert Menendez (D-NJ), the Team USA Made in America Act of 2012 requires the United States Olympic Committee “to purchase or otherwise obtain only uniforms” that meet the standards of the Federal Trade Commission for labeling as `Made in USA’. The Team USA MIA Act further defines uniform to include accessories, such as ties, belts, shoes, and hats.

To understand the labeling standard, we turn to the Federal Trade Commission’s Enforcement Policy Statement on U.S. Origin Claims, which provides industry guidance on the use of “Made in USA” claims in advertising and labeling.