Our Daily Opinion Summary writers have picked some interesting cases to highlight this week, with one in particular cutting close to home.

First up, we leave the lower forty-eight and head up to Alaska with AES Corp. v. Steadfast Ins. Co.. The case involved the village and city of Kivalina, a community located on an Alaskan barrier island, which filed a lawsuit in the U.S. District Court against AES and other defendants for allegedly damaging the village by causing global warming through the emission of greenhouse gases. AES requested that Steadfast provide a defense and insurance coverage pursuant to the terms of their commercial general liability policy. Steadfast provided AES a defense under a reservation of rights and filed a declaratory judgment action, claiming that it did not owe AES a defense or indemnity regarding the Complaint brought by Kivalina. The circuit court granted Steadfast’s motion for summary judgment, holding that the Complaint filed by Kivalina did not allege property damage caused by an “occurrence” as that term was defined in AES’s contracts of insurance with Steadfast.

The selections from our Daily Opinion Summary writers are pretty varied this week covering a World of Warcraft game gone bad, a tug of war between two District Courts over Park Service limits of snowmobilers, a suit alleging negligence in the prescription of medications which led to murder, and the rights of part-owners of a dairy located in the Islamic Republic of Iran.

First up, we have Laurel’s pick, which she aptly labeled, “every mother’s nightmare.”

U.S. v. Lucas
US 7th Cir (Filed 2/29/12)
While playing World of Warcraft online, defendant requested sexual pictures of CG, a minor. CG blocked him, but reinstated him in exchange for online “currency.” Defendant again sent sexual messages; CG again blocked him. Defendant, on release following arrest for possession of large-capacity firearms, paid to obtain CG’s address, told others he planned to kill CG, dug holes in his yard, and removed the release latch from his trunk. He amassed weapons, drove 20 hours to CG’s home, and impersonated an officer to lure CG out of the house and kidnap him.  CG’s mother refused to allow defendant into the house. He pointed a handgun at her face, but she slammed the door and called police.  He was arrested and pled guilty to brandishing a firearm during a crime of violence, 18 U.S.C. 924(c). The district court sentenced him to 210 months’ imprisonment.  The Seventh Circuit affirmed. A district court may consider a wide range of conduct at sentencing, including acquitted conduct and dismissed offenses, and the sentencing ranges for those offenses. The court rejected arguments that the court treated defendant’s psychological conditions as an aggravating factor or impermissibly considered rehabilitation. 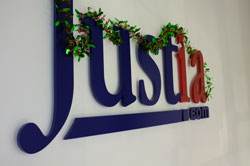 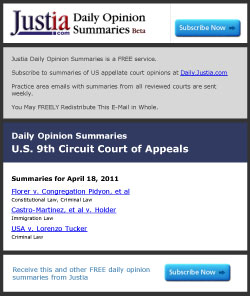 Courtney and I wanted to update you on our latest free law offering, Justia Daily Opinion Summaries. When we announced the launch last week, we noted that our jurisdictional coverage included all Federal Circuit Courts of Appeal and select state supreme courts. The team has been working hard to expand to even more jurisdictions and we’re pleased to say that we now offer summaries for over half the 50 U.S. states.  To see a complete list of our current offerings by jurisdiction and by practice area, go to our subscription page at http://daily.justia.com.  For the few remaining states that aren’t available yet, stay tuned. We’ll be adding more in the upcoming weeks.