This week’s cases are more like news of the weird than any special legal precedent. 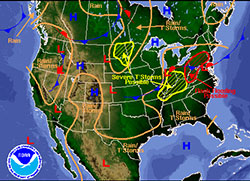 Take Burke v. Air Serv. Int’l, Inc., which held that plaintiff was not entitled to rely on Westerns in the place of expert testimony. Yeah. In that case, the Plaintiff, a former British soldier, was severely wounded in an ambush in Afghanistan. He sued the transport company that furnished the helicopter he flew in on and the construction company that contracted with his employer for his security services, alleging that they had negligently failed to take appropriate security measures for his trip. The district court granted summary judgment for the Defendant as Plaintiff failed to proffer an expert to testify regarding the standard of care for such security precautions. Plaintiff appealed, maintaining that no expert was required because, inter alia, “every juror will have seen” such films as High Noon. Make a note, counsel: reliance on old Westerns rather than expert testimony to establish a standard of care may be fatal to a negligence claim.

Another opinion on in-air injury came out of the 7th Circuit this week. In LeGrande v. United States, plaintiff flight attendant sued for injuries she sustained during turbulence aboard an aircraft. Instead of going after the carrier (her employer), she used the Tort Claims Act to sue the US under the theory that FAA negligently had failed to warn the flight’s captain that turbulence had been forecast along the flight path. The district court granted summary judgement for the US (affirmed by 7th Cir.), but plaintiff was undeterred. She next argued that her injuries resulted from the negligence of a National Weather Service meteorologist. The court concluded that the FAA breached no duty owed to LeGrande and that LeGrande failed to give the NWS the notice that the FTCA requires. If at first you don’t succeed, try! try! again.