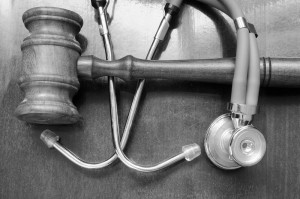 Plaintiffs filed suit challenging the validity of an IRS final rule implementing the premium tax credit provision of the Patient Protection and Affordable Care Act (ACA), 26 U.S.C. 36B. The final rule interprets the Act as authorizing the IRS to grant tax credits to individuals who purchase health insurance on both state-run insurance “Exchanges” and federally-facilitated “Exchanges” created and operated by HHS. The court found that the applicable statutory language is ambiguous and subject to multiple interpretations. Applying deference to the IRS’s determination, the court upheld the rule as a permissible exercise of the agency’s discretion. Accordingly, the court affirmed the judgment of the district court.

Appellants challenged the IRS’s interpretation of 26 U.S.C. 36B, enacted as part of the Patient Protection and Affordable Care Act, under the Administrative Procedure Act (APA), 5 U.S.C. 706(2)(A). The district court held that the ACA’s text, structure, purpose, and legislative history make “clear that Congress intended to make premium tax credits available on both state-run and federally-facilitated Exchanges.” The district court held that even if the ACA were ambiguous, the IRS’s regulation would represent a permissible construction entitled to Chevron deference. The court concluded, however, that the ACA unambiguously restricts the section 36B subsidy to insurance purchased on Exchanges “established by the State.” Accordingly, the court reversed the judgment of the district court and vacated the IRS’s regulation.

Plaintiff, both individually and as the administrator of Bradley Gladden’s estate, filed suit against officers and the police chief, alleging that the officers violated Bradley’s rights under 42 U.S.C. 1983 and the Arkansas Civil Rights Act, Ark. Code Ann. 16-123-101 et seq., as well as committed the tort of wrongful death under the Arkansas Wrongful Death Act, Ark. Code Ann. 16-62-101 et seq. Bradley had requested that the officers give him a ride to his sister’s house in the next county because he was intoxicated, but the officers instead left him at an isolated off-ramp at the county line, which was the edge of the officers’ jurisdiction. The officers instructed Bradley to seek help at a nearby factory. Bradley ended up dying of hypothermia a half-mile from the drop-off, in the opposite direction of the factory. Where the Fourteenth Amendment generally does not give private citizens a constitutional right to police assistance, the court concluded that plaintiff could not establish that a special relationship existed because Bradley accepted a ride from the officers and was sober enough to make this decision rationally; and Bradley cannot avail himself of the constitutional right to police assistance based on a custodial relationship with the state. The court also concluded that Bradley’s official capacity claims failed where, assuming that it was the Police Department’s custom to give rides to persons in its jurisdictions, plaintiff could not demonstrate an affirmative duty of care. Consequently, plaintiff’s state law claims also failed. Accordingly, the court concluded that the district court did not err in granting the officers summary judgment based on qualified immunity, in granting official immunity to all defendants, and dismissing the state-law claims.

In 1989, James Dean and Ada JoAnn Taylor (Appellees) were swept into the investigation into the 1985 death of Helen Wilson. Both Appellees ultimately confessed to their involvement in Wilson’s murder after receiving “help” from law enforcement officers to remember the details of the crime. DNA tests later determined that neither Appellee had any involvement in the crime. Appellees subsequently received pardons. In 2010, Appellees brought actions against the State pursuant to the Nebraska Claims for Wrongful Conviction and Imprisonment Act. The district court found in favor of Appellees and awarded each of them damages. The State appealed, arguing that Appellees could not recover under the Act because they made false statements in connection with the crime. The Supreme Court affirmed the judgment as to the State’s liability, holding that the district court did not err in its interpretation of the phrase “false statement” or in finding that Appellees did not make false statements under the Act.

Appellee’s lengthy criminal record spans 14 pages with a total of 228 charges, terminating in four convictions, four guilty pleas, fourteen withdrawals, fifty-three dismissals, forty-four nolle prosequi, three transfers to family court, sixteen acquittals, five sustained demurrers, thirty transfers to the juvenile division, and fifty-five held for court. Between April 2010 and January 2011, Appellee filed eight separate pro se petitions in Philadelphia under the name Mark Wallace, or one of his aliases, Mark Green or James Smith, seeking destruction of fingerprints, photographs, and arrest records from past charges that had not resulted in convictions. The Commonwealth estimated that Appellee sought in total the expungement of approximately 150 charges. After determining that hearings were unnecessary, the trial court denied each of Appellee’s eight petitions in separate orders issued from May 2010 to March 2011. Appellee appealed each denial to the Superior Court, which consolidated the eight appeals and ultimately reversed the trial court in a published opinion. Having rejected the trial court’s analysis, the Superior Court concluded that “some of Appell[ee]’s non-conviction arrest records may be eligible for expungement.” However, due to confusion from the record at hand, the Superior Court was unable to determine which specific charges might be subject to expungement, and so the court remanded to the trial court for clarification. The Commonwealth filed a Petition for Allowance of Appeal to the Supreme Court on the whether the Superior Court erred by holding that an incarcerated career criminal had a due process right to a hearing at which the trial court must determine – on a charge by charge basis – whether over a hundred prior criminal charges against him should be expunged. Because the trial court’s findings “are sound and strongly supported by the record,” the Supreme Court found “no reason to disturb the trial court’s holdings.” The Supreme Court also found that an inmate did not have the right to petition for expungment while incarcerated. Accordingly, the order of the Superior Court was reversed, and the trial court’s orders were reinstated.

At issue in this case was whether a law enforcement officer’s knock on a car window constitutes a “seizure.” Defendant argued that he was seized when a sheriff’s deputy knocked on the driver’s side of Defendant’s vehicle and asked Defendant to roll down the window. Defendant unsuccessfully moved to suppress the evidence obtained after he rolled down the window and was subsequently found guilty of driving a motor vehicle while under the influence of an intoxicant. The court of appeals reversed, concluding that “when a uniformed officer approaches a vehicle at night and directs the driver to roll down his or her window, a reasonable driver would not feel free to ignore the officer.” The Supreme Court reversed, holding (1) a law enforcement officer’s knock on a car window does not by itself constitute a show of authority sufficient to give rise to the belief in a reasonable person that the person is not free to leave; and (2) under the totality of the circumstances of this case, the officer did not show a level of intimidation or exercise of authority sufficient to implicate the Fourth Amendment until after Defendant rolled down his window and exposed the grounds for the seizure.