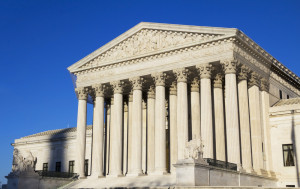 Department of Health and Human Services (HHS) regulations implementing the 2010 Patient Protection and Affordable Care Act (ACA) require that employers’ group health plans furnish preventive care and screenings for women without cost sharing requirements, 42 U.S.C. 300gg–13(a)(4). Nonexempt employers must provide coverage for 20 FDA-approved contraceptive methods, including four that may have the effect of preventing a fertilized egg from developing. Religious employers, such as churches, are exempt from the contraceptive mandate. HHS has effectively exempted religious nonprofit organizations; an insurer must exclude contraceptive coverage from such an employer’s plan and provide participants with separate payments for contraceptive services. Closely held for-profit corporations sought an injunction under the 1993 Religious Freedom Restoration Act (RFRA), which prohibits the government from substantially burdening a person’s exercise of religion even by a rule of general applicability unless it demonstrates that imposing the burden is the least restrictive means of furthering a compelling governmental interest, 42 U.S.C. 2000bb–1(a), (b). As amended by the Religious Land Use and Institutionalized Persons Act of 2000 (RLUIPA), RFRA covers “any exercise of religion, whether or not compelled by, or central to, a system of religious belief.” The Third Circuit held that a for-profit corporation could not “engage in religious exercise” under RFRA and that the mandate imposed no requirements on corporate owners in their personal capacity. The Tenth Circuit held that the businesses are “persons” under RFRA; that the contraceptive mandate substantially burdened their religious exercise; and that HHS had not demonstrated that the mandate was the “least restrictive means” of furthering a compelling governmental interest.

The Supreme Court ruled in favor of the businesses, holding that RFRA applies to regulations that govern the activities of closely held for-profit corporations. The Court declined to “leave merchants with a difficult choice” of giving up the right to seek judicial protection of their religious liberty or forgoing the benefits of operating as corporations. Nothing in RFRA suggests intent to depart from the Dictionary Act definition of “person,” which includes corporations, 1 U.S.C.1; no definition of “person” includes natural persons and nonprofit corporations, but excludes for-profit corporations. “Any suggestion that for-profit corporations are incapable of exercising religion because their purpose is simply to make money flies in the face of modern corporate law.” The Court rejected arguments based on the difficulty of ascertaining the “beliefs” of large, publicly traded corporations and that the mandate itself requires only insurance coverage. If the plaintiff companies refuse to provide contraceptive coverage, they face severe economic consequences; the government failed to show that the contraceptive mandate is the least restrictive means of furthering a compelling interest in guaranteeing cost-free access to the four challenged contraceptive methods. The government could assume the cost of providing the four contraceptives or could extend the accommodation already established for religious nonprofit organizations. The Court noted that its decision concerns only the contraceptive mandate, not all insurance-coverage mandates, e.g., for vaccinations or blood transfusions.