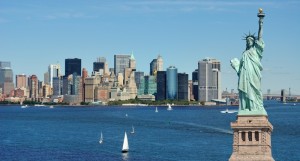 Qualifying U.S. citizens and lawful permanent residents (LPRs) may petition for family members to obtain immigrant visas. A sponsored individual (principal beneficiary) is placed into a “family preference” category based on relationship to the petitioner, 8 U.S.C. 1153(a)(1)–(4). The principal beneficiary’s spouse and minor children qualify as derivative beneficiaries, entitled to the same status and order of consideration as the principal. Beneficiaries become eligible to apply for visas in order of priority date, the date a petition was filed. Because the process often takes years, a child may age out and lose status before she obtains a visa. The Child Status Protection Act (CSPA) provides that if the age of an alien is determined to be 21 years or older, notwithstanding allowances for bureaucratic delay, the petition “shall automatically be converted to the appropriate category and the alien shall retain the original priority date issued upon receipt of the original petition.”  In this case, principal beneficiaries who became LPRs, filed petitions for their aged-out children (who did not have a qualifying relationship with the original sponsor), asserting that the newly filed petitions should receive the same priority date as their original petitions.  U. S. Citizenship and Immigration Services (USCIS) disagreed. The district court granted the government summary judgment, deferring to the Board of Immigration Appeals’ (BIA’s) determination under section 1153(h)(3). The Ninth Circuit reversed, holding that the provision entitled all aged-out derivative beneficiaries to automatic conversion and priority date retention. The Supreme Court reversed, reasoning that each immigrant must have a qualified and willing sponsor. If an original sponsor does not have a legally recognized relationship with the aged-out children, another sponsor must be identified for the alien to qualify for a new family preference category. Immigration officials do not know whether a valid sponsor exists unless the aged-out beneficiary files and USCIS approves a new petition. Section 1153(h)(3) does not require a new petition for derivative beneficiaries who had a qualifying relationship with an LPR both before and after they aged out. In contrast, the nieces, nephews, and grandchildren of the initial sponsors cannot qualify for “automatic conversion.”  The BIA’s interpretation benefits from administrative simplicity and fits with immigration law’s basic first-come, first-served rule.

This appeal concerned the HathiTrust Digital Library (HDL). At issue was whether the HDL’s use of copyrighted material is protected against a claim of copyright infringement under the doctrine of fair use. Plaintiffs appealed the district court’s grant of summary judgment in favor of defendants and dismissal of their claims of copyright infringement. The district court also dismissed the claims of certain plaintiffs for lack of standing and dismissed other copyright claims as unripe. The court held that three authors’ associations lacked standing to bring suit on behalf of their members and were properly dismissed from the suit and the remaining four authors’ associations do have standing to bring suit on behalf of their members; the doctrine of fair use allowed defendants to create a full-text searchable database of copyrighted works and to provide those works in formats accessible to those with disabilities; and claims predicated upon the Orphan Works Project are not ripe for adjudication. Therefore, the court affirmed as to those issues. The court vacated the judgment, in part, insofar as it rests on the district court’s holding related to the claim of infringement predicated upon defendants’ preservation of copyrighted works and remanded for further proceedings.

Read More: Another Fair Use Victory for Book Scanning in HathiTrust

Defendant appealed his conviction on several counts of Hobbs Act robbery, conspiracy, and knowing possession of a firearm in furtherance of a crime of violence. Defendant principally argued that the district court admitted location evidence based on stored cell site information obtained by the prosecution without a warrant, in violation of his Fourth Amendment rights. The court held that cell site location information is within the subscriber’s reasonable expectation of privacy and the obtaining of that data without a warrant is a Fourth Amendment violation. Nonetheless, the court concluded that the district court did not commit a reversible error where the good faith exception to the exclusionary rule under United States v. Leon was applicable in this instance. The court affirmed the judgment of conviction and vacated only that portion of the sentence attributable to the enhancement for brandishing. Only one witness testified that a gun was pointed at her, and there was no evidence that defendant was the one who did it. Further, the jury had an opportunity to convict defendant of either (1) possessing a firearm in furtherance of the robbery or (2) using or carrying a firearm in furtherance of the robbery. Yet it only found that defendant possessed a firearm.

Terri Sholberg died when the car she was driving hit a horse standing in the road. Diane Sholberg, as personal representative of her estate, sued Daniel Truman (the owner of the horse, which had escaped from its stall) and Robert and Marilyn Truman (the title owners of the farm that Daniel Truman operated). Other than being the title owners, defendants Robert and Marilyn Truman had nothing to do with the farm or the animals on it. The circuit court entered a default judgment against Daniel Truman, but granted summary judgment in defendants’ favor, concluding that they could not be held liable for a public nuisance because they were not in possession of the property. The Court of Appeals affirmed in part and reversed with regard to the public nuisance claim, holding that defendants’ ownership of the property from which the alleged nuisance arose was sufficient to allow a nuisance action against them. Plaintiff applied for leave to appeal with respect to an issue concerning violations of the Equine Activity Liability Act, and defendants filed a separate application for leave to appeal on the nuisance claim. The Supreme Court denied plaintiff’s application, and granted defendant’s application, reversing reversed in part the Court of Appeals’ judgment with respect to the public nuisance claim: defendants merely owned the property. Defendants never possessed or exercised any control over the property and had not even visited it in more than a decade. There was no evidence that defendants knew or had reason to know that Daniel Truman’s animals had been escaping the property when the accident happened. Because defendants did not control or possess the property or the horse, there was no basis for imposing tort liability on them for a public nuisance. “Daniel Truman was the person best able to prevent any harm to others, and given that defendants had resigned all charge and control over the property to him, he was the person exclusively responsible for the alleged public nuisance he created on the property.”

When Respondent was fifteen, he was charged with unlawful possession of weapons by persons under sixteen in violation of N.Y. Penal Law 265.05. The charges stemmed from a police officer’s recovery of a machete from Respondent. The Appellate Division found the petition facially insufficient because it did not contain allegations that would have established that the knife Respondent possessed was a “dangerous knife” under section 265.05. Rather, the Appellate Court found that the knife was “utilitarian.” The Court of Appeals reversed, holding that, “while a machete has utilitarian purposes, it would be unreasonable to infer from the statement supporting the petition that Respondent was using the machete for cutting plants.”