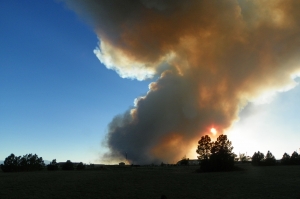 The Clean Air Act (CAA) requires national ambient air quality standards (NAAQS) for pollutants at levels that will protect public health, 42 U.S.C. 7408. Once EPA establishes NAAQS, it designates “nonattainment” areas; each state must submit a State Implementation Plan, (SIP), within three years of any new or revised NAAQS. From the date EPA determines that a SIP is inadequate, EPA has two years to promulgate a Federal Implementation Plan (FIP). SIPs must comply with a Good Neighbor Provision, and “contain adequate provisions … prohibiting .. . any source or other type of emissions activity within the State from emitting any air pollutant in amounts which will … contribute significantly to nonattainment in, or interfere with maintenance by, any other State with respect to” NAAQS. In response to flaws in its 2005 Clean Air Interstate Rule, identified by the D. C. Circuit, EPA promulgated the Cross-State Air Pollution Rule (Transport Rule), curbing nitrogen oxide and sulfur dioxide emissions in 27 upwind states to achieve downwind attainment of three NAAQS and providing that an upwind state contributed significantly to downwind nonattainment if its exported pollution produced at least one percent of a NAAQS in a downwind state and could be eliminated cost-effectively. EPA created an annual emissions “budget” for each upwind state and contemporaneously promulgated FIPs allocating each state’s budget among its pollution sources. The D.C. Circuit vacated the rule as exceeding EPA’s authority. The Supreme Court reversed. The CAA does not require that states be given another opportunity to file a SIP after EPA has quantified interstate pollution obligations. Disapproval of a SIP, without more, triggers EPA’s obligation to issue a FIP within precise deadlines. That EPA had previously accorded upwind states a chance to allocate emission budgets among their sources does not show that it acted arbitrarily by refraining to do so in this instance. The Good Neighbor Provision does not dictate a method of apportionment, so EPA had authority to select from among reasonable options; nothing precludes the final calculation from relying on costs. By imposing uniform cost thresholds on regulated states, the rule is efficient and is stricter on states that have done less pollution control in the past and does not amount to “over-control.”

The Patent Act provides: “The court in exceptional cases may award reasonable attorney fees to the prevailing party,” 35 U.S.C. 285. The Federal Circuit has interpreted section 285 as authorizing fee awards only “when there has been some material inappropriate conduct,” or when it is both “brought in subjective bad faith” and “objectively baseless.” A health insurance company obtained a declaratory judgment that a patent was invalid and not infringed. The district court found the case “exceptional” and awarded attorney fees of $4,694,727.40, $209,626.56 in expenses, and $375,400.05 in expert fees. The court found a pattern of “vexatious” and “deceitful” conduct by the defendant in attempting to force other companies to purchase licenses, even after its own experts determined that its claims lacked merit. The Federal Circuit reviewed the determination de novo and reversed in part. A unanimous Supreme Court vacated. All aspects of a district court’s exceptional-case determination should be reviewed for abuse of discretion. That determination is based on statutory text that emphasizes that the district court is better positioned to make the “multifarious and novel” determination, which is not susceptible to “useful generalization” of the sort that de novo review provides, and is “likely to profit from the experience that an abuse-of discretion rule will permit to develop.” The word “exceptional” should be given its ordinary meaning: “one that stands out from others with respect to the substantive strength of a party’s litigating position (considering both the governing law and the facts of the case) or the unreasonable manner in which the case was litigated,” considering the totality of the circumstances.

The Patent Act authorizes district courts to award attorney’s fees to prevailing parties in “exceptional cases,” 35 U.S.C. 285. In Brooks Furniture, the Federal Circuit defined an “exceptional case” as one which either involves “material inappropriate conduct” or is both “objectively baseless” and “brought in subjective bad faith” as shown by clear and convincing evidence. ICON sued Octane for patent infringement. The district court granted summary judgment to Octane, but denied attorney’s fees under section 285. The Federal Circuit affirmed. The Supreme Court reversed, finding the Brooks Furniture framework “unduly rigid’  in light of the statutory grant of discretion to district courts. Section 285 imposes only one constraint on the award of attorney’s fees, limiting it to “exceptional” cases. Because the Patent Act does not define “exceptional,” the term should be given it ordinary meaning: “uncommon,” “rare,” or “not ordinary.” An “exceptional” case is simply one that stands out from others with respect to the substantive strength of a party’s litigating position (considering both governing law and the facts) or the unreasonable manner in which the case was litigated. District courts may determine whether a case is “exceptional” in the case-by-case exercise of their discretion, considering the totality of the circumstances. The Brooks Furniture standard was so demanding that it appeared to render section 285 superfluous of the courts’ inherent power to award fees in cases involving misconduct or bad faith. Section 285 imposes no specific evidentiary burden.

In 2003 Harris was hired as a resale buyer at Ford. Throughout her employment Harris suffered from IBS, an illness that causes fecal incontinence. On bad days, Harris was unable to drive to work or stand up from her desk without soiling herself. Harris began to take intermittent FMLA leave. Her absences started to affect her job performance. In 2005 Harris’s then-supervisor allowed her to work on a flex-time telecommuting schedule on a trial basis. The supervisor deemed the trial unsuccessful. Although her next supervisor did not approve remote work, Harris worked from home on an informal basis. The days that she stayed home were marked as absences. When Harris worked nights and weekends, she made mistakes and missed deadlines because she lacked access to suppliers. After Ford declined her request for a formal telecommuting arrangement, Harris complained to the Equal Employment Opportunity Commission. Harris was terminated in 2009 and the EEOC sued, claiming that Ford discriminated against Harris on the basis of disability and retaliated against her for filing a charge with the EEOC. The district court granted summary judgment in favor of Ford. The Sixth Circuit reversed and remanded, finding find evidence that created a genuine dispute as to whether Harris was qualified to work as a resale buyer and whether she was terminated in retaliation for filing an EEOC charge.

Defendant was accused of multiple instances of sexual activity with C.M., a fourteen-year-old student at Billings Senior High School, where Defendant was employed as a teacher. C.M. subsequently took her own life. The State eventually charged Defendant with three counts of sexual intercourse without consent. Defendant pled guilty to one count of the charged offense, and the State recommended a prison sentence of twenty years with ten suspended. The district court, however, sentenced Defendant to fifteen years’ incarceration with all but thirty-one days suspended, indicating that C.M. had “control” of the situation with Defendant and that she was mature beyond her years. After significant public outcry, the district court apologized and published an order acknowledging the illegality of Defendant’s sentence. The Supreme Court vacated the district court’s judgment, holding (1) the sentence in this case was imposed under an inapplicable statute, and the illegality of the sentence could not be corrected by striking some portion of the offending language; and (2) reassignment to a new judge was necessary to preserve the appearance of fairness and justice in this matter. Remanded for resentencing.

Respondent-cross-petitioner J.C. Johnson was convicted of five crimes related to several days of ongoing domestic violence against his wife. A jury convicted Johnson for holding his wife “J.J.” under his control, allowing her only to leave their apartment when Johnson left, using his Rottweiler to restrain her movements, and keeping a knife and icepick near the bed to intimidate her. For three days, Johnson severely injured his wife by choking her, hitting her with rocks, and allowing the dog to bite her. J.J. managed to escape and receive treatment for her injuries. On appeal, Johnson argued: (1) the information for the unlawful imprisonment charges were insufficient because it did not include a definition of the word “restraint;” and (2) he received ineffective assistance of counsel when his trial lawyer proposed a definition of “reckless” in jury instructions that did not include charge-specific language when the “to convict” instruction included the specific language. The Court of Appeals overturned Johnson’s unlawful imprisonment conviction because the State omitted the definition of “restrain.” The appellate court agreed with Johnson that it was error to give a jury instruction on a generic definition of “reckless,” but that trial counsel was not ineffective for proposing it. The Supreme Court reversed on the “restraint” issue, holding that charging documents need only contain essential elements of a crime, not related definitions. With regard to the “reckless” issue, the Supreme Court affirmed the Court of Appeals, but for a different reason: it was not error to instruct a jury on the generic definition as long as the jury was given a “to convict” instruction that lists every element of the crime the State needs to prove in order to convict the defendant.