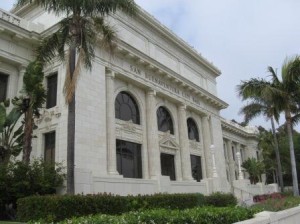 CNS blames, in part, the old California Court Case Management System (CCMS) for these delays in processing. I have written about the colossal failure of CCMS, a system meant to unify the state court filing systems that wasted millions of dollars and was eventually shut down.

Bill Girdner, the Editor at Courthouse News Service, described the problem this way:

In the years since a few California courts adopted the clunky Court Case Management System, it was apparent that there was a militancy in court officials about pushing the press back. They believed the public’s record was theirs to control as they saw fit. . . In Ventura, which also runs the junked software, the clerk refused to let the media see new matters until they were processed, delaying access for days, with individual cases avoiding review for extended periods.

According to Mr. Girdner, changes to court e-filing rules made over a year ago led to this standoff. In February of 2013, the Judicial Council amended California’s e-filing rules:

The e-filing rules acknowledge that court documents are public as soon as they are filed. Rule 2.254(c) says, ‘An electronically filed document is a public document at the time it is filed unless it is sealed.’

But then rule 2.250 (b)(7) amends the definition of electronic filing to say, ‘This definition concerns the activity of filing and does not include the processing and review of the document and its entry into the court records, which are necessary for the document to be officially filed.’

Further rule 2.253(b)(1)(7) says, ‘Any document that is received electronically must be processed … to be filed as an official court record.’

If CCMS is cumbersome and inefficient, that lag time is passed on to the journalists.  From this perspective, the courts with the deepest investment in CCMS are also the most attached to their documents. Ventura County, the defendant in the instant case, is one of the counties that employs CCMS.

This raises an interesting question for those of us that promote free access to court documents:  As courts move to outsourcing or privatizing their docketing systems, will the access problem get better or worse? CCMS didn’t work, so counties are looking to private solutions. But, as we have seen in other states, that often includes a paywall to the public and the press. A paywall operates as a real impediment to public access. Furthermore, a non-governmental entity is charged with the control of public documents – a problem that exists right now with primary law. Westlaw and LexisNexis operate as the official publisher of state and federal case law, and often state statutes, and the law is placed behind a private paywall—out of reach from the public.

Image credit: By Doncram (Own work) [CC-BY-SA-3.0 or GFDL], via Wikimedia Commons