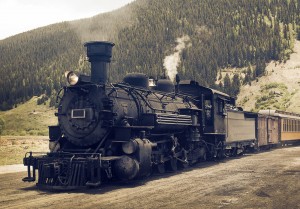 The General Railroad Right-of-Way Act of 1875 provides railroad companies “right[s] of way through the public lands of the United States,” 43 U.S.C. 934. One such right of way, created in 1908, crosses land that the government conveyed to the Brandt family in a 1976 land patent. That patent stated that the land was granted subject to the right of way, but it did not specify what would occur if the railroad relinquished those rights. A successor railroad abandoned the right of way with federal approval. The government sought a declaration of abandonment and an order quieting its title to the abandoned right of way, including the stretch across the Brandt patent. Brandt argued that the right of way was a mere easement that was extinguished upon abandonment. The district court quieted title in the government. The Tenth Circuit affirmed. The Supreme Court reversed. The right of way was an easement that was terminated by abandonment, leaving Brandt’s land unburdened. The Court noted that that the government had argued the opposite position in an earlier case. In that case, the Court found the 1875 Act’s text “wholly inconsistent” with the grant of a fee interest. An easement disappears when abandoned by its beneficiary.

Lewis was injured in an automobile accident and her health plan paid $180,000 for her medical treatment   Lewis filed a tort suit against the driver (her son-in-law), represented by Georgia lawyer Lashgari, and obtained a $500,000 settlement. Lashgari knew the plan had a subrogation lien, but split the proceeds between himself and Lewis. He claimed that the plan was owed nothing. The plan filed suit under ERISA to enforce the lien, 29 U.S.C. 1132(a)(3). The defendants argued that because the settlement funds have been dissipated, the suit was actually for damages, not authorized by ERISA. The district judge ordered the defendants to place $180,000 in Lashgari’s trust account pending judgment. The defendants did not comply. A year later, the defendants having neither placed any money in a trust account nor produced any evidence of their inability to pay, the judge held them in civil contempt, ordered them to produce records that would establish their financial situations, and ordered Lashgari to documents relating to the contempt to the General Counsel of the State Bar for possible disciplinary proceedings against him.  The defendants appealed the contempt order. The Seventh Circuit dismissed, characterizing the appeal as frivolous and the defendants’ conduct as outrageous.

Read More: Posner: Appeal brief is ‘a gaunt, pathetic document’; lawyer ‘shenanigans’ should have been reported

Defendant, a native of Cambodia and a tax preparer in the United States, was the president of the Cambodian Freedom Fighters (CFF), an organization formed for the purpose of removing Prime Minister Hun Sen from power and becoming the controlling party in Cambodia. After CFF committed a series of small-scale attacks on Cambodian establishments, defendant participated in a CFF plan to attack government buildings protected by government forces in Phnom Phenh (Operation Volcano). In this appeal, defendant challenged his convictions for conspiracy to commit murder in a foreign country in violation of 18 U.S.C. 956(a), conspiracy to damage or destroy property in a foreign country in violation of 18 U.S.C. 956(b), and expedition against a friendly nation in violation of 18 U.S.C. 960. The court concluded that section 956(a), enacted as part of the Antiterrorism and Effective Death Penalty Act of 1996, 110 Stat. 1214, 1294-95, was not ambiguous, and therefore, defendant was correctly convicted under the statute; there was sufficient evidence for a factfinder to conclude that defendant had the intent to commit murder; the district court did not plainly err in its jury instruction when it defined “at peace” as the absence of “war” or “military conflict,” and thereby required “military conflict” to end the state of “peace” for the purposes of sections 956(b) and 960; the district court’s failure to instruct the jury to find an overt act that occurred within the five-year limitations period did not affect defendant’s substantial rights; the district court did not commit error in sentencing defendant to life in prison; and defendant’s sentence was not substantively unreasonable. Accordingly, the court affirmed defendant’s convictions and sentence.

Clifford Lippitt was a certified geologist employed at S.W. Cole, Inc. Worcester Associates retained S.W. Cole to provide the necessary technical assistance in order to complete the closure of a landfill Worcester owned. After S.W. Cole drilled bedrock wells and collected data from them, Lippitt submitted a report presenting the results of the tests and concluding that there was no evidence the landfill was impacting neighboring residential wells. The Board of Certification for Geologists and Soil Scientists determined that Lippitt had violated the Code of Ethics applicable to geologists and soil scientists because he had provided a professional opinion “without being as thoroughly informed as might be reasonably expected.” The Supreme Court vacated the superior court’s judgment affirming the Board’s decision, holding (1) the Board’s disagreement with a geologist’s opinion, without a concurrent determination that the opinion is false, is based on false data, or reflects the geologist’s incompetence, cannot be the basis for a determination that the opinion constitutes a violation of the geologists’ Code of Ethics; and (2) the Board erred in determining that Lippitt violated the Code of Ethics on the grounds that Lippitt’s opinion was not “reasonable” in light of the underlying data.