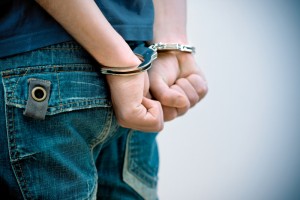 Responding to a report of underage drinking in a home, officers found a group celebrating eighth grade graduation. Police asked the teens to step outside individually for breathalyzer testing. Seven tested positive for alcohol. Police arrested them and notified their parents. In the morning, a juvenile worker arrived at the police station, and, after speaking with a judge, indicated that the children were to be detained for a court appearance the next day. At the regional juvenile detention center, the minors underwent routine fingerprinting, mug shots, and metal-detection screening. During a hygiene inspection and health screening, they were required to disrobe completely for visual inspection to detect “injuries, physical abnormalities, scars and body markings, ectoparasites, and general physical condition.” A same-sex youth worker observed the juveniles for several minutes from a distance of one to two feet, recording findings for review by an R.N.  The minors were required to shower with delousing shampoo. They were released the following day. The charges were dropped. In a suit under 42 U.S.C. 1983, the district court granted partial summary judgment in favor of the juveniles, based on a “clearly established right for both adults and juveniles to be free from strip searches absent individualized suspicion” that negated a qualified immunity defense. The Sixth Circuit reversed, stating that no clearly established principle of constitutional law forbids a juvenile detention center from implementing a generally applicable, suspicionless strip-search policy upon intake into the facility.

GLAAD filed a putative class action alleging that CNN violated California’s Unruh Civil Rights Act, Cal. Civ. Code 51 et seq., and California’s Disabled Persons Act (DPA), Cal. Civ. Code 54 et seq., by intentionally excluding deaf and hard of hearing visitors from accessing the videos on CNN.com. CNN filed a motion to strike under California’s anti-SLAPP law, Cal. Civ. Proc. Code 425.16 et seq., arguing that GLAAD’s claims arose from conduct in furtherance of CNN’s free speech rights and that GLAAD failed to establish a probability of prevailing on its claims. The court concluded that CNN’s conduct was in furtherance of its free speech rights on a matter of public interest; where, as here, an action directly targeted the way a content provider chose to deliver, present, or publish news content on matters of public interest, that action was based on conduct in furtherance of free speech rights and must withstand scrutiny under California’s anti-SLAPP statute; GLAAD has failed to establish a probability of success on the merits of its Unruh Act claims because it has not shown intentional discrimination based on disability as required under California law; at this juncture, none of CNN’s constitutional challenges posed a barrier to GLAAD’s pursuit of its DPA claims; GLAAD’s DPA claims were not foreclosed by the doctrines of field preemption and conflict preemption; GLAAD’s DPA claims have the requisite minimal merit to survive CNN’s free speech challenge and dormant Commerce Clause challenge; and the court certified to the California Supreme Court the remaining dispositive question of state law regarding GLAAD’s DPA claims. Accordingly, the court vacated the district court’s order denying CNN’s motion to dismiss.

Defendant-Appellant Tiffany Parker was convicted of second-degree assault. She appealed that conviction, arguing the Superior Court erred in admitting statements posted on her Facebook profile. Defendant urged the Supreme Court to adopt Maryland’s approach to admitting this kind of evidence: social media evidence could only be authenticated through the testimony of the creator, documentation of the internet history or hard drive of the purported creator’s computer, or information obtained directly from the social networking site. Under this approach, social media evidence is only authenticated and admissible where the proponent can convince the trial judge that the social media post was not falsified or created by another user. The State argued the Delaware Court adopt the Texas approach: the proponent could authenticate social media evidence using any type of evidence so long as he or she could demonstrate to the trial judge that a jury could reasonably find that the proffered evidence was authentic. The Superior Court adopted the Texas approach and found that Defendant’s social media post was sufficiently authenticated by circumstantial evidence and by testimony explaining how the post was obtained. On appeal, Defendant contended that social media evidence requires greater scrutiny. The Delaware Supreme Court concluded that the Texas approach better conformed to the requirements of Rule 104 and Rule 901 of the Delaware Rules of Evidence. The Court therefore found no abuse of discretion by the trial court in admitting the social media evidence in accordance with the Delaware Rules of Evidence, and affirmed.

John and Jane Doe, the parents Susan Doe, a transgender girl, filed a complaint with the Maine Human Rights Commission alleging that Regional School Unit 26 (RSU 26) had violated the Maine Human Rights Act (MHRA) by excluding Susan from the communal girls’ bathroom at elementary and middle school. The Commission found reasonable grounds to believe discrimination had occurred. Thereafter, the Does and the Commission filed a complaint in the superior court asserting claims for unlawful discrimination in education (Count I) and unlawful discrimination in a place of public accommodation (Count II) on the basis of sexual orientation. The superior court granted RSU 26’s motion for summary judgment on all counts. The Supreme Court vacated the judgment of the superior court, holding that where it has been clearly established that a student’s psychological well-being and educational success depend on being permitted to use the communal bathroom consistent with her gender identity, denying the student access to the appropriate bathroom constitutes sexual orientation discrimination in violation of the MHRA. Remanded for entry of summary judgment for the Does and the Commission.