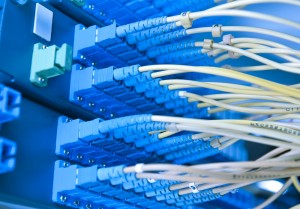 Verizon challenged the FCC’s Open Internet Order, which imposed disclosure, anti-blocking, and anti-discrimination requirements on broadband providers. The court concluded that the Commission has established that section 706 of the Telecommunications Act of 1996, 47 U.S.C. 1302(a), (b), vests it with affirmative authority to enact measures encouraging the deployment of broadband infrastructure; the Commission reasonably interpreted section 706 to empower it to promulgate rules governing broadband providers’ treatment of Internet traffic, and its justification for the specific rules at issue here – that they will preserve and facilitate the “virtuous circle” of innovation that has driven the explosive growth of the Internet – was reasonable and supported by substantial evidence; given that the Commission has chosen to classify broadband providers in a manner that exempts them from treatment as common carriers, the Communications Act, 47 U.S.C. 201 et seq., expressly prohibits the Commission from nonetheless regulating them as such; and because the Commission has failed to establish that the anti-discrimination and anti-blocking rules did not impose per se common carrier obligations, the court vacated those portions of the Open Internet Order.

In re the Marriage of Cardona and Castro, Colorado Supreme Court (1/13/14)
Family Law

The Supreme Court granted certiorari to consider whether accrued vacation and sick leave may be considered marital property subject to division under the Uniform Dissolution of Marriage Act (UDMA). The trial court entered an order dividing the value of the husband’s accrued vacation and sick leave as part of the marital estate. The husband appealed, and the court of appeals reversed. Upon review, the Supreme Court held that where a spouse has an enforceable right to be paid for accrued vacation or sick leave, such leave earned during the marriage is marital property for the purposes of the UDMA. Where the value of the leave can be ascertained at the time of dissolution, a trial court should consider such value when equitably dividing the marital estate. In this case, the Supreme Court concluded the trial court erred in considering the value of the husband’s accrued leave because no competent evidence was presented to establish he had an enforceable right to payment for such leave.

When Dr. David Roberts performed amniocentesis on Plaintiff’s mother, who was pregnant with Plaintiff, bleeding occurred. Complications arose from the unsuccessful amniocentesis, and Plaintiff was born with damaged kidneys and cerebral palsy. Plaintiff filed a motion for judgment against Dr. Roberts and other defendants for medical malpractice. Plaintiff asserted that her claim was not covered by Virginia’s Medical Malpractice Act because she was not a “patient” as defined by the Act where she was not a “natural person” at the time of the treatment, and therefore, her claim was not subject to the Act’s statutory cap on damages. The jury returned a $7 million verdict in Plaintiff’s favor. The trial court reduced the verdict, holding that the cap applied. The Supreme Court affirmed, holding that Virginia’s statutory cap on damages applied to Plaintiff’s cause of action because Plaintiff became a “patient” when she was born alive, and therefore, her claim fell within the Act.