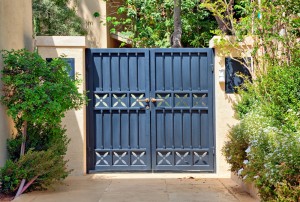 Officer Stanton and his partner responded to a call about a disturbance involving a person with a baseball bat. Stanton was familiar with the LaMesa neighborhood, known for gang violence. The officers, wearing uniforms and driving a marked police vehicle, approached the location and noticed men walking in the street. Seeing the police car, two men turned into an apartment complex. Patrick crossed the street about 25 yards in front of Stanton’s car and ran toward a residence. Stanton did not see a baseball bat, but considered Patrick’s behavior suspicious and decided to investigate. Stanton exited his car, called out “police,” and ordered Patrick to stop. Patrick did not stop, but “looked directly at Stanton,” and went through the gate of the six-foot wooden fence enclosing Sims’ front yard. Stanton believed that Patrick had committed a jailable misdemeanor by disobeying his order, “fear[ed] for [his] safety” and made the “split-second decision” to kick open the gate. Sims was behind the gate when it flew open, striking and injuring Sims. Sims sued under 42 U.S.C 1983. The district court granted summary judgment to Stanton. The Ninth Circuit reversed, holding that Stanton’s warrantless entry was unconstitutional because Sims had the same expectation of privacy in her curtilage as in her home itself, there was no immediate danger, and Patrick had committed only a minor offense; under clearly established law Stanton’s pursuit of Patrick did not justify warrantless entry and Stanton was not entitled to qualified immunity. The Supreme Court reversed, noting that courts nationwide are divided on whether an officer with probable cause to arrest a suspect for a misdemeanor may enter a home without a warrant while in hot pursuit of that suspect. The Ninth Circuit read “too broadly” Supreme Court precedent that did not involve hot pursuit. The Court did not determine whether Stanton’s entry was constitutional; Stanton may have been mistaken in believing his actions were justified, but was not “plainly incompetent.”

This appeal stemmed from Seven Arts’s attempts to establish ownership of copyrights in several motion pictures: “Rules of Engagement,” “An American Rhapsody,” and “Who is Cletis Tout?” Seven Arts filed suit against Paramount and Content Media for copyright infringement, a declaration of ownership rights, and an accounting, seeking a declaration that neither Content Media, nor its predecessors-in-interest, CanWest, was the owner or grantee of rights to the films. The action was filed over three years after Paramount plainly and expressly repudiated Seven Arts’s copyright ownership by choosing to continue paying royalties to CanWest and Content Media, rather than to Seven Arts’s predecessors. The court joined its sister circuits in holding that an untimely ownership claim will bar a claim for copyright infringement where the gravaman of the dispute was ownership, at least where, as here, the parties were in a close relationship. The court affirmed the judgment of the district court, concluding that the district court properly dismissed the suit because it was apparent from the complaint that Paramount clearly and expressly repudiated Seven Arts’s ownership of the copyrights more than three years before Seven Arts brought suit.

Two women, DMT and TMH, agreed to jointly conceive and raise a child together. The child was conceived through the use of assisted reproductive technology. TMH provided the egg, and DMT gave birth to the child. The couple participated in raising their child together until their relationship ended and DMT absconded with the child. TMH sought to establish her parental rights to the child and to reassume parental responsibilities. The court of appeal concluded that Florida’s assisted reproductive technology statute was unconstitutional as applied to TMH because it automatically deprived TMH of her ability to assert her fundamental right to be a parent. The Supreme Court affirmed, concluding that, based on the circumstances of this case, the statute was unconstitutional as applied to abridge TMH’s fundamental right to be a parent and violated state and federal equal protection by denying same-sex couples the statutory protection against the automatic relinquishment of parental rights that it affords to heterosexual unmarried couples seeking to utilize the assistance of reproductive technology. Remanded.

Defendant, who was eighteen years old at the time, was badly injured in a single-vehicle accident. While she lay sedated at the hospital, a police trooper, without providing Miranda warnings, questioned Defendant about the car accident, seeking information as to who was driving. After a pause in the questioning, the trooper told Defendant that two of her friends who had been in the car were dead and urged Defendant to tell the truth about who was driving. Defendant subsequently made inculpatory statements. Defendant was indicted on two counts of manslaughter, two counts of aggravated criminal OUI, and one count of leaving the scene of an accident that resulted in serious bodily injury. The trial court granted Defendant’s motion to suppress as to all statements Defendant made after the pause in the interview, concluding (1) at that point, Defendant became a suspect and was in custody because she reasonably did not believe that she was free to terminate the interview; and (2) consequently, Defendant should have been given Miranda warnings. The Supreme Court affirmed, holding that the district court did not err in finding that Defendant’s statements throughout were voluntary but that Defendant was in custody after the break in the interview.

UNLV Boyd School of Law professor Leslie C. Griffin comments on a recently published book by Slate’s Dahlia Lithwick explaining the magic that women bring to law and the courts.