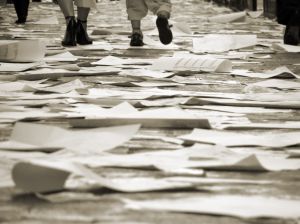 Yahoo Corp. sought permission to disclose its motion in opposition to surveillance requests after the PRISM program was revealed. The decision in that case was published in redacted form at In re Directives Pursuant to Sec. 105b of the Foreign Intelligence Surveillance Act, 551 F. 3d 1004 (Foreign Intel. Surv. Ct. Rev. 2008).  This is one of only two opinions ever published by the FISCR.

Yahoo argued that the opinion should be unredacted in light of (a) recent declassification decisions by the DNI (Director of National Intelligence), (b) the current controversy surrounding the use of directives under Section 702 of the FISA Amendments Act of 2008, and (c) recent litigation over the constitutionality of Section 702. They also cite the current public interest in the FISC in light of the Snowden leaks.

The US filed a reply taking no position, and the FISCR ordered the Government to conduct a declassification review of the briefs and redact any sensitive material, at which point the FISCR will issue a memorandum opinion. The deadline for that is July 29.

Microsoft sought a declaratory judgment from the FISC authorizing disclosure of aggregate data about the number of FISC orders it receives and complies with. Microsoft explicitly mentions in the pleading that it seeks to correct the misimpression, furthered by inaccurate media reporting, that it provides the government with direct access to its servers and network infrastructure through the PRISM program.

Microsoft argued that the FISA and the FAA do not prohibit disclosure of these numbers, and that the secrecy provisions in these statutes are aimed at preventing disclosure of surveillance to the targets. They also argue that a prohibition on disclosure of this nature would be unconstitutional as a content-based restriction on speech, prohibited by the First Amendment.

A coalition of advocacy groups, led by famous First Amendment lawyer Floyd Abrams, moved to file an amicus brief in support of the Microsoft and Google petitions for permission to publish aggregate data. The Amici brief focused on the First Amendment implications of restricting the providers’ speech.

A group of press advocated and publishers also filed an amicus brief in support of the petition to publish aggregate data. Their brief focused on the First Amendment as well, but from the perspective of a “willing speaker,” and the heightened public interest in hearing what the speech.

The American Civil Liberties Union and the Media Freedom and Access Clinic at Yale Law School filed a motion to release FISC opinion that discuss the meaning, scope, and constitutionality of Section 215 of the Patriot Act, 50 USC 1861. They argue that (a) disclosure is required under the First Amendment and (b) the FISC has the authority to publish its own opinions, sua sponte, and public interest and the need for debate compels it to do so.

The brief argues that access to public opinions is deeply enshrined in common law, that Government officials, including President Obama, have called for a robust debate about the issue, and that access to the opinions interpreting the statutes are necessary in order to understand the scope of the law and properly inform the debate.

Several members of Congress filed a brief of amici curiae in support of the ACLU’s motion. They argue that disclosure is necessary to allow them to explain the surveillance programs to the public and to have an informed discussion in Congress about the scope and application of the law.

The amici argue that the Speech and Debate Clause, U.S. Const. Art. I §6 cl. 1 protects the open exchange of ideas in Congress, and supports the “informing function” of the Legislature. In times of crisis, Congress must be able to debate and inform the public, and a prohibition on access and speech about judicial opinions impairs this essential function.

The United States filed a brief in opposition, arguing that (1) the ACLU has already been denied by the Court (in an unpublished FISC opinion issued in 2008, and attached to the brief), which the ACLU did not appeal, and (2) the ACLU has no standing to make the motion, since it was not a party any relevant opinion. The Government also argues that, in any event, a declassification process is underway the the Government will release material if they deem it appropriate. It’s interesting to note that Attachment A is a memorandum opinion from the FISC, previously unpublished. That opinion holds that  any common law right to public access to opinions was pre-empted by FISA and its security procedures. It also found that the ACLU failed to demonstrate a First Amendment right of access.

The Court issued an Order requesting bar membership and security clearance for counsel associated with the case, with a deadline of August 9.

The EFF filed a motion for declaratory judgement on the question of whether FISC Rules preclude the production of FISC opinions under a FOIA Request. The EFF filed a FOIA request for opinions in which the Court held that a surveillance request was unreasonable under the Fourth Amendment. The Department of Justice responded that it located the opinions but was barred from producing them under FISC Rules of Court.  The DOJ opposed the EFF’s motion, arguing that the determination was outside of the FISC’s jurisdiction. Essentially, the DOJ argues that only the agency has the discretion to release its records, and that the FISC does not have the authority to order the DOJ to do so. The FISC only has the authority to release its own records.

Attached to this opinion are Exhibits, including the EFF’s original motion to compel disclosure  – an interesting glimpse into how FISA is dealt with in a federal district court.

The FISC concluded that its jurisdiction over the matter was appropriate, and that FISC Rules do not bar production of its opinions.  It found that FISC Rule 62 does not have the effect of sealing FISC opinions, and that the Executive Branch is fundamentally responsible for safeguarding sensitive national security information.

The underlying FOIA action is ongoing. You can follow it on Justia Dockets.