Justia Weekly Writers’ Picks – What Would Sister Bertrille Do? 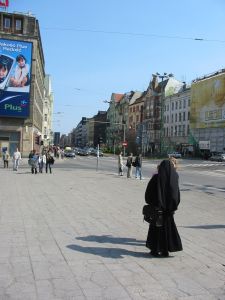 In 1956, Sister Ephrem of the Most Precious Blood, experienced apparitions of the Virgin Mary, during which, Sister Ephrem claimed, she was told: “I am Our Lady of America.” The Archbishop supported a program of devotions to Our Lady of America. In 1965 Pope Paul VI approved creation of a cloister, which lasted until at least 1977, when surviving members left and formed a new congregation, dedicated to devotions to Our Lady of America.  Sister Ephrem directed it until her death in 2000. Sister Therese succeeded Sister Ephrem, who willed to Sister Theres all her property, mostly purchased with donated money. Sister Therese worked with McCarthy, a lawyer, and Langsenkamp until 2007, when Langsenkamp and McCarthy established the Langsenkamp Family Apostolate in the chapel in which the Virgin Mary allegedly appeared to Sister Ephrem. They sued Sister Therese, claiming theft of physical and intellectual property, fraud, and defamation. She counterclaimed alleging theft of a statue and of the website and defamation by calling her a “fake nun.”  The district court denied McCarthy’s motion that the court take notice of the Holy See’s rulings on Sister Therese’s status in the Church. The Seventh Circuit reversed, with “a reminder” that courts may not decide (or to allow juries to decide) religious questions.  Determination of the ownership of the property is likely possible without resolving religious questions.

Grigsby, a middle-age man who lived in homeless shelters, was charged with three unarmed bank robberies, 18 U.S.C. 2113(a). Psychologists conducted examinations and filed reports that diagnosed paranoid schizophrenia and stated that Grigsby was not competent to stand trial. Neither party objected. The court committed Grigsby to custody (18 U.S.C. 4241(d)(1))  to determine whether he could be restored to competency to stand trial. Forensic evaluators concluded that Grigsby did not understand the seriousness of his legal difficulty; lacked ability to assist his lawyer during trial; and was not capable of waiving his constitutional rights rationally or of testifying on his own behalf. Grigsby refused to take oral medication. Because he was not gravely disabled and did not present a danger to himself, others, or the facility, he did not meet the criteria for involuntary medication. The evaluators requested an order authorizing them to inject Grigsby involuntarily with a first-generation antipsychotic drug, (haloperidol (Haldol) or fluphenazine), or a second-generation antipsychotic drug, risperidone, to restore competency. These medications can cause serious side effects. The district court granted an order under Sell v. U.S. (2003). The Sixth Circuit reversed, finding that special circumstances unique to the case indicate that Grigsby’s liberty interest in avoiding involuntary medication outweighs the government’s interest in prosecution.

Krieger, age 53, cannot pay her debts. She lives with her mother in a rural community; they have only monthly income from governmental programs. She is too poor to move and her car, more than 10 years old, needs repairs. She lacks Internet access.  In her bankruptcy proceeding, Educational Credit moved to exempt her student loans from discharge; 11 U.S.C.523(a)(8) excludes educational loans “unless excepting such debt from discharge under this paragraph would impose an undue hardship on the debtor.”  The district court reversed the bankruptcy court, noting that Krieger, although unable to pay even $1 per year, had not enrolled in a program that offered a 25-year payment schedule. The Seventh Circuit reversed, in favor of Krieger. “Undue hardship” requires showing that the debtor cannot maintain a minimal standard of living if forced to repay; that additional circumstances exist indicating that this situation is likely to persist for a significant portion of the repayment period; and that the debtor has made good faith efforts to repay. The court noted that Krieger incurred the debt to obtain paralegal training at a community college, has made about 200 applications in 10 years, and used a substantial part of her divorce settlement to pay off as much of the educational loan as possible.

In 2001, petitioner fell from a barge to a dry dock while working as a ship laborer. He then filed a workers’ compensation claim under the Longshore and Harbor Workers’ Compensation Act, 33 U.S.C. 901-950, for the injuries from his fall. In 2003, petitioner shot himself in the head, causing severe injuries. Petitioner also sought compensation for these injuries under the Act, alleging that his suicide attempt resulted from his 2001 fall and the litigation over that claim. The Benefits Review Board subsequently affirmed the ALJ’s denial of benefits. The court held, however, that evidence that a claimant planned his suicide did not necessarily preclude compensation under the Act because the proper inquiry was whether the claimant’s work-related injury caused him to attempt suicide. In this case, the ALJ erroneously applied the irresistible impulse test instead of the chain of causation test. Therefore, the court granted the petition for review and remanded for further proceedings. On remand, the question was whether there was a direct and unbroken chain of causation between petitioner’s work-related injury and his suicide attempt.

The appellant was a party to a divorce and child custody litigation. The appellee, a court-appointed psychologist, was to serve as an expert to conduct an evaluation of the parties and of their children. The appellant alleged that he paid the appellee for the evaluation and after several months, and as a result of the inaction of the appellee her report had not been provided as ordered. The appellant settled the divorce proceedings in a manner he claimed was injurious to him and his son. The trial court granted the appellee’s motion to dismiss. The motion urged that as a court-appointed witness, the appellee was immune to liability in damages. Though after its review, the Supreme Court found that as a court-appointed expert, appellee may have been immune to liability in damages as “her duty was to the court.” However, because the appellant claimed that the appellee failed to provide any services whatsoever for the amount paid, the Court treated those allegations as true: “[a]n expert would not be entitled to claim a fee for a court-ordered service that was not provided. This does not mean the appellant must be satisfied with the fees, but the appellant has a right to have the court decide if the fees were earned, and whether there was a valid legal defense to the assertions of the appellant that the appellee neither completed the required report, nor testified.” The appellant admitted that the underlying child custody was settled, so the trial court should have also considered the impact the settlement had on the appellee’s opportunity to complete the report or to testify. Accordingly, the trial court’s granting the appellee’s motion to dismiss was reversed and remanded for further consideration.

The Medlens’ dog Avery escaped the family’s backyard and was picked up by animal control. Before the Medlens could retrieve Avery, shelter worker Carla Strickland mistakenly placed Avery on the euthanasia list, and Avery was put to sleep. The Medlens sued Strickland for causing Avery’s death and sought damages for Avery’s “intrinsic value.” The trial court dismissed the suit with prejudice, concluding that Texas law barred such damages. The court of appeals reversed, becoming the first Texas court to hold that a dog owner may recover intangible loss-of-companionship damages in the form of intrinsic or sentimental-value property damages. At issue before the Supreme Court was whether emotional-injury damages were recoverable for the negligent destruction of a dog. The Supreme Court reversed, holding that under established legal doctrine, recovery in pet-death cases is, barring legislative reclassification, limited to “loss of value, not loss of relationship.”