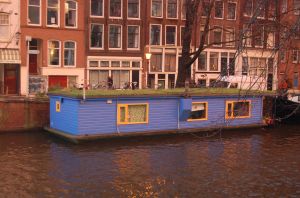 Lozman’s floating home was a plywood structure with empty bilge space underneath to keep it afloat. He had it towed several times before deciding on a marina owned by the city of Riviera Beach. After various disputes and unsuccessful efforts to evict him from the marina, the city brought an admiralty lawsuit in rem against the home, seeking a lien for dockage fees and damages for trespass. The district court found the floating home to be a “vessel” under the Rules of Construction Act, which defines a “vessel” as including “every description of watercraft or other artificial contrivance used, or capable of being used, as a means of transportation on water,” 1 U. S. C. 3; concluded that admiralty jurisdiction was proper; and awarded fees and damages. The Eleventh Circuit affirmed, noting that the home was “capable” of movement over water despite subjective intent to remain moored indefinitely. The Supreme Court reversed, holding that the case was not moot, although the home has been destroyed. Lozman’s floating home is not a “vessel.” The definition of “transportation” must be applied in a practical way; a structure does not fall within its scope unless a reasonable observer, looking to the home’s physical characteristics and activities, would consider it designed to a practical degree for carrying people or things over water. But for the fact that it floats, nothing about Lozman’s home suggests that it was designed to any practical degree to transport persons or things over water. It had no steering mechanism, had an unraked hull and rectangular bottom 10 inches below water, and had no capacity to generate or store electricity. It lacked self-propulsion, unlike an ordinary houseboat. The Court considered only objective evidence to craft a “workable and consistent” definition that “should offer guidance in a significant number of borderline cases.”

Plaintiff brought this action under 42 U.S.C. 1983, alleging that his constitutional rights were violated while he was detained at Faulkner County Detention Center (FCDC). The court held that, in the circumstances presented in this case, defendants’ refusal to grant plaintiff’s request for additional toilet paper did not violate any clearly established right. Accordingly, defendants were entitled to qualified immunity. Therefore, the order denying qualified immunity was reversed and the case was remanded to the district court for the entry of an appropriate order.

Bonita Pitt visited inmate defendant Ralph Sowell in a prison area monitored by security cameras. Sergeant Salvatore D’Amico of the Department of Corrections (DOC) observed Pitt and defendant lean forward. Defendant appeared to kiss Pitt on the cheek. She lifted her shirt slightly, reached into her left front pocket, took out an item, and placed it in defendant’s hand. D’Amico then saw defendant lean back and place the item into a bag of potato chips. D’Amico immediately radioed an officer to seize defendant and the bag of chips. When the officer approached defendant, D’Amico, still monitoring the security cameras, saw defendant place the bag of chips under the seat next to him, and an officer recover the bag of chips. D’Amico emptied the contents of the bag of chips, which contained a balloon with thirty envelopes of heroin inside it. After waiving his Miranda rights, defendant admitted to a DOC investigator that he received drugs during the visit. Defendant was charged with drug offenses. At trial, D’Amico testified as to his observations, and the State played the videotape recording of the entire incident. A DOC investigator was accepted as the State’s expert in “narcotics investigation.” During testimony, the expert opined that “an exchange of narcotics took place.” The issue on appeal before the Supreme Court centered on whether the State properly elicited expert testimony in response to a hypothetical question that in this case, “an exchange of narcotics took place.” Upon review, the Court concluded that the expert’s opinion was improper because it related to a straightforward factual allegation that was not beyond the understanding of an average juror and because the expert referred to facts not contained in the hypothetical. The Court affirmed defendant’s conviction however, concluding that under the plain error standard, there was overwhelming evidence in the record of his quilt.

Daughter was born with cerebral palsy and developmental disabilities. Daughter’s Father and Mother later divorced. After Daughter turned eighteen, a California court appointed Mother as Daughter’s guardian and conservator. Mother later moved to South Dakota with her new husband and Daughter. Father subsequently sought to end Mother’s role as guardian and conservator. Following a hearing, a South Dakota circuit court terminated Mother’s appointment as guardian and conservator for Daughter, finding that she failed to adequately address Daughter’s obesity and transition to more independent living. Mother appealed. The Supreme Court affirmed, holding that the circuit court did not abuse its discretion in (1) preventing Mother from questioning attorneys appointed to represent Daughter about certain statements attorneys made in an investigative report, as the report was not entered into evidence at the hearing; and (2) removing Mother as Daughter’s guardian and conservator, as Mother did not make significant progress toward the goal of moving Daughter into an independent residential living situation and failed to promptly and aggressively manage the issue of Daughter’s weight.