Below are a couple of interesting opinions our Daily Summary writers have picked out for you this week. 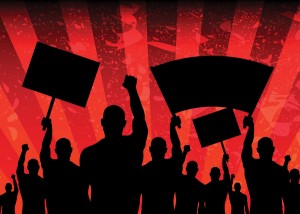 At issue in this case was whether the governor of Maine violated the First Amendment by removing a large state-owned mural, commissioned by the former administration, from its location on the walls of a small waiting room for visitors to the Maine Department of Labor (MDOL). The mural consisted of panels depicting selected episodes in the history of Maine labor. Plaintiffs, six Maine residents who had viewed the mural and planned to view it again at the MDOL office, filed a complaint against the governor and the commissioner of MDOL claiming that the mural’s removal was impermissibly content- and viewpoint-based. The U.S. district court entered judgment for Defendants. After noting that the MDOL waiting room was not a public forum, the First Circuit Court of Appeals affirmed, holding that the government may, in this setting, choose to disassociate itself from an endorsement implicit from the setting for the mural, which it understood as interfering with the message of neutrality the administration wished to portray.

This case arose from the 2010 Deepwater Horizon accident in the Gulf of Mexico where an explosion killed 11 workers, caused the drilling platform to sink, and resulted in a major uncontrolled release of oil. At Presidential direction, those events prompted the Department of the Interior to prohibit all new and existing oil and gas drilling operations on the Outer Continental Shelf for six months. The district court preliminarily enjoined enforcement of the moratorium. At issue on appeal was whether the Interior’s subsequent actions violated a specific provision of the court’s injunction, justifying a finding of civil contempt. The court held that even though the Interior immediately took steps to avoid the effect of the injunction, the court concluded that none of those actions violated the court’s order. Accordingly, the court reversed the judgment.