But why should Samsung — or any other company — be allowed access to a competitor’s confidential settlement agreement?

Confidentiality agreements are often viewed as the ‘carrot on a stick’ to motivate litigating parties to resolve their legal disputes. There are many reasons parties do not wish to reveal details of a settlement agreement, only one of which is thatsuch disclosure could be used to third party’s advantage in different litigation.

Apple and HTC filed a joint statement in federal court earlier this month advising that “there are no pending matters requiring judicial attention.” The next day Apple and HTC announced that they resolved their patent litigation via a confidential global settlement:

“that includes the dismissal of all current lawsuits and a ten-year license agreement. The license extends to current and future patents held by both parties.”

If Apple was willing to license patents that it was litigating with HTC, Samsung may be wondering why Apple couldn’t have licensed the technology to the South Korean company as well.

If Samsung’s request is granted, it could find one of two things from the agreement. If the Apple-HTC patent licensing agreement is purely monetary, then Apple’s argument for the need of an injunction against sale of Samsung products would be substantially weakened (because it would demonstrate that monetary damages would have been sufficient). If, on the other hand, the settlement agreement involved cross-licensing of patents, then Samsung’s argument that monetary damages are sufficient would likely not stand up on appeal.

Whether the details of Apple’s settlement agreement with HTC will be publicly divulged, revealed in camera, i.e., only to Judge Koh in court, or remain confidential remains to be seen.

Read the email exchange between Samsung’s and Apple’s lawyers (redacted and highlighted by Justia) here: 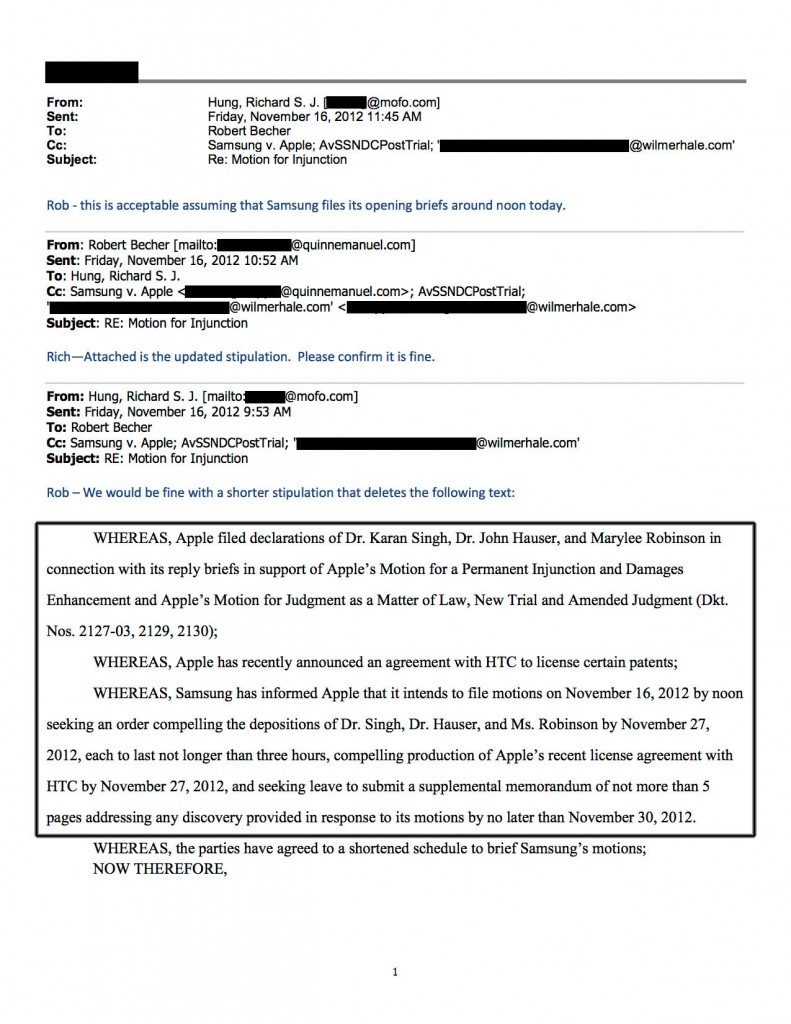