Get Out the Vote! (Just Make Sure You’re at the Right Polling Place) – Justia Weekly Writers’ Picks 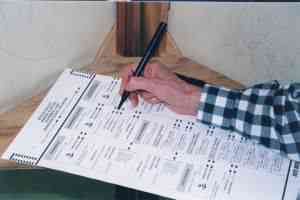 The Sixth Circuit granted Ohio a stay of the district court’s October 26 order granting a preliminary injunction that requires the state to count provisional ballots cast in the wrong polling place due to poll-worker error (wrong-place/wrong-precinct ballots) in the November election. The court previously affirmed an order that Ohio count right-place/wrong-precinct provisional ballots caused by poll-worker error.  Plaintiffs failed to show strong likelihood of success on the merits of constitutional claims concerning wrong-place/wrong-precinct ballots. The salient feature of the right-place/ wrong-precinct problem was disenfranchisement, by worker error, of voters who arrive at the correct place, a situation caused by Ohio’s system of multi-precinct polling places. Though voters rely on workers to direct them to the proper precinct in the polling place, they are not as dependent in identifying their correct polling place. Ohio law requires officials to provide notice of where they are eligible to vote; information is easily accessible. There is sparse evidence of workers sending voters to the wrong polling location. The state has a legitimate interest in maintaining its precinct-based voting system; there is a strong public interest that militates against changing the rules during early voting. The injunction would interfere with orderly election administration and cause confusion among poll workers and voters.

Argentina appealed from permanent injunctions entered by the district court designed to remedy Argentina’s failure to pay bondholders after a default in 2001 on its sovereign debt. The district court granted plaintiffs summary judgment and enjoined Argentina from making payments on debt issued pursuant to its 2005 and 2010 restructurings without making comparable payments on the defaulted debt. The court held that an equal treatment provision in the bonds barred Argentina from discriminating against plaintiffs’ bonds in favor of bonds issued in connection with the restructurings and that Argentina violated that provision by ranking its payment obligations on the defaulted debt below its obligations to the holders of its restructured debt. Accordingly, the court affirmed the judgment of the district court; found no abuse of discretion in the injunctive relief; and concluded that the injunction did not violate the Foreign Sovereign Immunities Act (FSIA), 28 U.S.C. 1602-1611. However, given the need for clarity as to how the injunctions were to function, the court remanded for further proceedings.

The sole issue in this certified appeal was whether a motorist, who was lawfully stopped in his own lane of travel while awaiting an opportunity to make a left turn, owes a legal duty to oncoming motorists to keep the wheels of his vehicle straight to ensure that he will not be propelled into the travel lane of oncoming traffic in the event that another motorist crashes into him from behind. Defendant appealed from the judgment of the appellate court reversing the summary judgment rendered by the trial court in his favor. The Supreme Court reversed, holding that the appellate court improperly focused on whether Defendant had breached a general duty of reasonable care by turning his wheels while awaiting an opportunity to make his turn rather than whether he owed a duty to oncoming drivers to foresee and defend against the possibility that a third driver would crash into the rear of his stopped vehicle and thrust it into the path of oncoming traffic. Remanded with direction to affirm the judgment of the trial court.

William Munich was shot and killed by his neighbor, Marvin Ballsmider, approximately 18 minutes after he placed his first phone call to the Skagit Emergency Communications Center. The two had been in a property dispute related to access to a driveway and Ballsmider’s property. Norma Smith, a Skagit 911 call taker (or operator), took the 911 call. Smith assured Munich that law enforcement was on the way. Smith entered the call as a priority two weapons offense rather than a priority one emergency call. Based on the code, the dispatched deputy, Dan Luvera, did not activate his emergency lights and only traveled slightly over the speed limit. About seven minutes later, Munich again called 911. Tammy Canniff took the second call, and Munich told her that he was running away from Ballsmider who was following and shooting. The dispatcher informed Deputy Luvera of these facts and the deputy consequently activated his emergency lights and siren and increased his speed. The second call ended with the sound of Munich being fatally shot on the highway. Deputy Luvera arrived two minutes later and arrested Ballsmider for Munich’s murder. Munich was running toward the direction from which Deputy Luvera arrived. Munich’s estate sued Skagit County, the Skagit County Sheriff’s Office, and Skagit Emergency Communications Center (County) for wrongful death, alleging the County negligently responded to the incident. The County moved for summary judgment dismissal of the Estate’s claims asserting it was not liable for Munich’s death under the public duty doctrine, specifically that the “special relationship” exception because the County provided no inaccurate or false information that Munich had detrimentally relied on. The trial court denied summary judgment, ruling the special relationship exception did not require false or inaccurate assurances. The Court of Appeals affirmed. Upon review, the Supreme Court concluded that where the express assurance promises action there is no falsity requirement because the assurances may be superficially correct but negligently fulfilled. The accuracy, or lack thereof, of an assurance has no bearing on the issue of whether an actionable duty was established.