Happy Friday! We’re back from Cornell’s Law via the Internet conference just in time for our weekly writers’ picks. 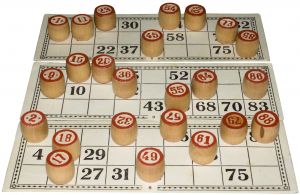 Plaintiffs, a group of nonprofit organizations licensed to conduct bingo games, filed suit challenging restrictions on the Texas Bingo Enabling Act (Bingo Act), Tex. Occ. Code 2001.001 et seq. Plaintiffs challenged provisions in the Bingo Act that prohibited charities from using the money generated by conducting bingo games for lobbying activities or to support or oppose ballot measures. The district court granted summary judgment in favor of plaintiffs and issued a permanent injunction preventing enforcement of the challenged statutory provisions. The court reversed and held that the Bingo Act’s restrictions on the use of bingo proceeds for political advocacy were permissible conditions on a government subsidy and did not operate to penalize speech.
Read More:
Court Rejects ‘Citizens United’ Arguments in Texas Bingo Case, Wall Street Journal Law Blog

Ohio requires that provisional ballots be cast in the correct precinct, with a completed voter affirmation, making no exception for wrong-precinct and deficient-affirmation ballots caused by poll-worker error, O.R.C.  3505.183(B)(4)(a)(ii)–(iii) and (B)(4)(b)(ii). A 2010 consent decree required the counting of certain wrong-precinct and deficient-affirmation provisional ballots where poll-worker error caused the nonconformity and the voters used the last four digits of their social security number for identification to cast their ballots. The ballot of a provisional voter using any other form of identification (e.g., current photo identification, current utility bill, paycheck) would not be counted.The district court denied a motion to vacate the decree and entered a preliminary injunction requiring the counting of all wrong-precinct and deficient-affirmation provisional ballots to remedy systemic exclusion of nonconforming ballots caused by poll-worker error. The Sixth Circuit affirmed the wrong-precinct remedy and reversed the deficient affirmation remedy and remanded for the district court to address the equal protection issue created by the consent decree’s provision for counting deficient-affirmation ballots by voters providing social security numbers, and a motion to modify the consent decree in light of the equal protection concerns raised by the consent decree’s differential treatment of provisional ballots.
Read More:
Court rejects Ohio voting law on tossing ballots filed in wrong precincts, CBS News

Respondent was in custody in county jail when officers discovered a cell phone hidden in a box beneath his bed. The State charged Respondent under Nev. Rev. Stat. 212.093(1), which, in pertinent part, prohibits prisoners, including county jail inmates, from possessing “any key, picklock, bolt cutters, wire cutters, saw, digging tool, rope, ladder, hook or any other tool or item adapted, designed or commonly used for the purpose of escaping” from custody. After being bound over to the district court, Respondent filed a pretrial petition for a writ of habeas corpus seeking to dismiss the charge, arguing that section 212.093(1) was unconstitutionally vague and overbroad, and that, by its terms, the statute does not prohibit the possession of cell phones. The district court agreed with Respondent and dismissed the charge. The Supreme Court affirmed, holding that by its plain and unambiguous language, section 212.093(1) does not prohibit county jail inmates from possessing cell phones.
Read More:
Court tosses charges vs. Nev inmate over cellphone, SF Gate

After finding a card for flowers for another woman in her husband’s car, Petitioner Gail Jennings confronted him. Respondent M. Lee Jennings confessed he had fallen in love with someone else, and although he refused to divulge her name, he admitted the two had been corresponding via e-mail for some time. Gail confided this situation to her daughter-in-law, Petitioner Holly Broome. Broome had previously worked for Jennings and knew he maintained a personal Yahoo! e-mail account. She accessed his account by guessing the correct answers to his security questions and read the e-mails exchanged between Jennings and his paramour. Broome then printed out copies of the incriminating e-mails and gave them to Thomas Neal, Gail’s attorney in the divorce proceedings and Brenda Cooke, a private investigator hired by Gail. Broome was sued civilly for hacking Lee Jennings’ Yahoo! e-mail account. The circuit court granted summary judgment in favor of Broome on all claims, including violation of the federal Stored Communications Act (SCA). The court of appeals reversed, finding that the e-mails she obtained from hacking Jennings’ account were in electronic storage and thus covered by the SCA. The Supreme Court disagreed and reversed. After opening them, Jennings left the single copies of the e-mails on the Yahoo! server and apparently did not download them or save another copy of them in any other location. The Court therefore declined to hold that retaining an opened e-mail constitutes “storing it for backup protection” under the Act. “We emphasize that although we reject the contention that Broome’s actions [gave] rise to a claim under the SCA, this should in no way be read as condoning her behavior. Instead, we only hold that she is not liable under the SCA because the e-mails in question do not meet the definition of ‘electronic storage’ under the Act.”

Can Illinois Require Gas Stations to Advertise on Its Behalf?

Illinois Law dean Vikram David Amar comments on a new Illinois law that would require gas stations to advertise that the state has deferred an increase in the state gas tax.