Here are some of the more interesting opinions issued this week, collected by our Daily Summary writers.

In State v. Eli, the Hawaii Supreme Court found that a police practice of asking an arrestee to tell his or her “side of the story” prior to offering Miranda warnings violates the defendant’s constitutional right against self-incrimination and right to due process. In this case, the “pre-interview” statements were thrown out, and the case remanded for a new trial.

The 9th Circuit issued an opinion on intellectual property and the Superman comic. In Pacific Pictures Corp. et al v. USCD-CALA, the Court refused to protect documents included in a subpoena under attorney client privilege. In this case, an attorney absconded with his client’s intellectual property, and the US Attorney was called to investigate. The US Attorney’s office issued a subpoena for copies of the stolen property, and promised that if the complainant complied with the request, they would not provide the documents to non-governmental third parties. The Court found that since Congress has declined to extend attorney client privilege to such materials, the Court was not in the position to do it here.

Finally, the Federal Circuit issued an opinion interpreting the “bad men” provisions in the 1868 Laramie Treaty between the Sioux Indian Tribe and the United States. In Richard v. US, the court found that the treaty provision to reimburse injured tribe members for expenses incurred by the wrongdoing of “bad men” subject to the authority of the US was not limited to “bad men” acting on or behalf of the U.S.

Not Letting Felons Vote Damages Democracy for All Citizens

Austin Sarat—Associate Provost, Associate Dean of the Faculty, and William Nelson Cromwell Professor of Jurisprudence and Political Science at Amherst College—argues that disenfranchising felons, as most American states do in some way, does substantial harm to everyone in our representative democracy. 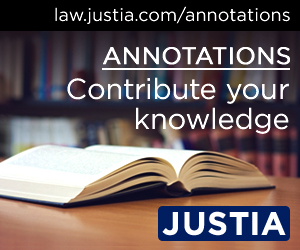