US v. Aleynikov: 2nd Circuit Says Code is Not Property Under NSPA and EEA 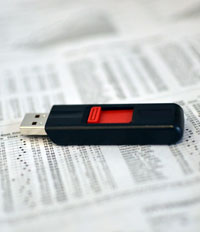 The defendant was a software programmer at Goldman Sachs who worked on their High Frequency Trading (HFT) system. This proprietary internal software system ran algorithms to determine when to make trades based on rapidly changing market conditions. Aleynikov left Goldman to take a job offer at a small Chicago software company, which wanted to develop HFT software. However, before leaving Goldman, Aleynikov uploaded significant portions of the HFT code from Goldman servers to a server in Germany. Then, he downloaded that code at home, put it on a flash drive, and took it to Chicago to give to his new employer. He was arrested by the FBI upon his return to New Jersey.

Aleynikov was convicted by a jury for violating the NSPA and EEA. He appealed that conviction to the Second Circuit, arguing that he did not steal “goods” under the NSPA and that the code was not “produced for” or “placed in” interstate commerce under the meaning of the the EEA.

The Second Circuit agreed with the petitioner, finding that the code was not a “good” for purposes of the NSPA. The Court relied on the plain language of the statute to find that code was not tangible or physical, and that NSPA prosecutions “have always involved physical ‘goods, wares, [or] merchandise’ that have themselves been ‘stolen, converted or taken by fraud.” (13) When the petitioner took the code, he transmitted it via the Internet — he did not walk out of the office with a thumb drive or a laptop. They relied on precedent that holds that “the theft and subsequent interstate transmission of purely intangible property is beyond the scope of the NSPA.” (14). The Court declined “to stretch or update statutory words of plain and ordinary meaning in order to better accommodate the digital age.” (18)

The Court also agreed with the petitioner that the theft did not violate the Economic Espionage Act because the product stolen was not “produced for” or “placed in” interstate or foreign commerce under the meaning of the statute. (20) The government argued that the software managed trades in domestic and foreign markets, which implicated the interstate commerce requirement. The Court was not persuaded, however, noting that the EEA was enacted a year after the Lopez decision, which limited the Congress’s Commerce Clause authority to those activities that “substantially affect interstate commerce” (26). Further, “Goldman’s HFT system was neither ‘produced for’ nor ‘placed in’ interstate or foreign commerce. Goldman had no intention of selling its HFT system or licensing it to anyone” and “because the HFT system was not designed to enter or pass in commerce, or to make something that does, Aleynikov’s theft of source code relating to that system was not an offense under the EEA.” (26)

Basically, the defendant in this case got pretty lucky and Congress is on notice to make some changes to the statute to ensure that it’s up to date with the realities of the digital age. The concurrence by Judge Calabresi hints at this. He writes, “While the legislative history can be read to create some ambiguity as to how broad a reach the EEA was designed to have, it is hard for me to conclude that Congress, in this law, actually meant to exempt the kind of behavior in which Aleynikov engaged.“

It seems patently obvious that Aleynikov stole trade secrets and valuable technology and planned to sell them to a competitor, but he technically did not violate these federal statutes. While I won’t shed any tears for Goldman Sachs, and I don’t generally fancy more laws and restrictions on intellectual property rights, this loophole should probably be closed.