The Law: Still Not Free 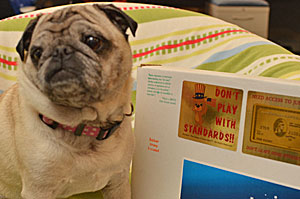 Carl Malamud of public.resource.org has a guest post on Boing Boing: Liberating America’s Secret, for-pay Laws. In it, he discusses the problem of laws that incorporate copyrighted technical standards by reference. Because the standards bodies that issue them are in the private sector, anyone who wants to view the standards (to comply with the law) must pay for a copy. Those copies can be very expensive; public.resource.org spent over $7,000 for copies of the corpus.

Carl’s basic premise, one that we endorse, is that citizens are entitled to read the law to which that they are bound, free of charge. If ignorance of the law is no defense to a crime, then we must of course be able to know what the law is. Expanding on Carl’s post, building codes and other standards are just the tip of the iceberg. Most of the laws in this country are not available for free.

Now, 49 states* and all of the federal courts of appeal publish draft opinions on their websites for the public to read. In legal parlance, these are called slip opinions. You can cite to them, but only until the official version is printed by the official publisher. Then, you need the official citation, along with the official page numbers, to cite to this document in court papers or legal writing.

The Supreme Court of the U.S., which publishes pdf versions of its bound volumes (official opinions), is a notable exception.

Google Scholar, bless them, posts official opinions online for free to the public. But note: that is because Google pays for copies from these publishers. They do this because they’re Google and they’re awesome, but do not mistake this for free access–someone else is paying for it, just not you.

Similarly, all states publish a version of their code online to read for free. However, those databases are, for the most part, papered over with disclaimers and copyright statements, and to cite to the code in a legal document, you must use the official (privately published) version.

What is needed right now is a system of universal citation. 16 states** employ this method of publishing, which cuts out the middleman (private legal publishers). They do this by adopting a neutral citation format and inserting paragraph numbers into the opinion, and then they publish the opinion on their website. Voila! Official opinions, ready to cite, available for free to the public.

The government likes to make a big deal out of how they post all the opinions online, or that they limit PACER charges [except, oops, those fees just went up], or whatever — but the truth of the matter is, these are not official opinions, and you cannot cite to them. The question is why? Why haven’t other states — and the federal government — adopted a neutral citation scheme?

Carl’s post did a great job of explaining problems of access to proprietary standards, and a lot of Boing Boing commenters pointed out that this was specialized law, not something that a person needs in everyday life. However, the law I am talking about above does affect everyone, in every aspect of their life — these are the laws that citizens are beholden to in our democracy. But if you want to read and cite them to the court, you must pay for the privilege.

*Alabama is the only state that charges for access to its Supreme Court Opinions. You can read them on Justia or Google Scholar instead.

For more information, check out the following links.

Why the fuck are we still citing to page numbers in cases?

This is why we need universal citation