H.S. Senior Tweets F-word from Home; School’s Response: Get the F**k Out 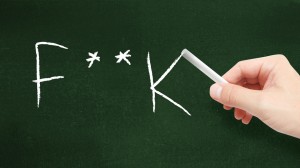 Responsible Use Policy: Garrett-Keyser-Butler Community School District
A strong argument can be made that he didn’t violate the Policy:

According to Austin: “I don’t think that the school should be looking at [my tweet], because its my own personal [Twitter] account, and it’s not of their business.”

He argues that, “I shouldn’t be getting in trouble for stuff that I did on my own time, on my own computer.”

Gee, that makes plenty of sense.

It is ironic how the District that claims to be preparing “high school graduates…to use multiple technologies upon entrance into the work force and/or higher education,” yet forbids students from “post[ing] personal information about [their] life and experiences” online.

The District’s Policy claims to teach students how to use “collaborative devices and applications” like “such as smart phones and cell phones, wikis, multiuser virtual environments, games and social networks.” How can it do that with such a contradictory Policy in place?

The brouhaha isn’t over, as this video makes clear. Fellow students protested Austin’s ouster, prompting the District to call in local police.

Austin will still graduate, however, but he is now reportedly attending an alternative school.

What do you think about the graduating high school student’s tweet and the District’s decision to expel him?