An iPhone user walks into an Apple store… 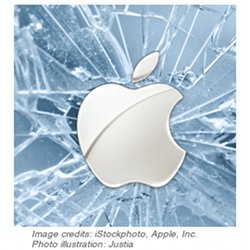 According to the lawsuit, Paswell was “planning to return her iPhone” to the store when she walked right into the store’s glass doors.

There is no suggestion that another Apple customer slammed a door into the plaintiff. No mention of any holiday shopper stampede when the plaintiff allegedly hurt herself. No indication that the elderly shopper was texting or talking on her iPhone at the time. Nope, none of that.

A YouTube video of the store’s grand opening day, however, shows that the Apple Store’s doors actually have giant vertical handles attached to them. Here’s a screenshot from the video, with a red arrow showing their location. 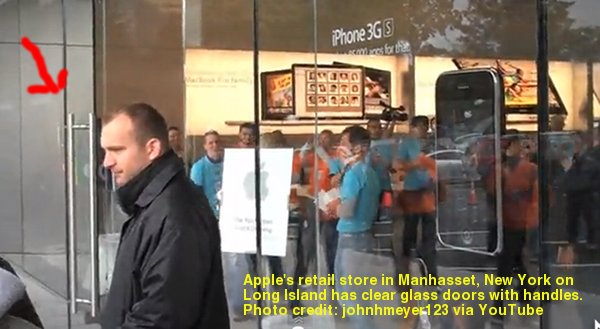 If you plan on going through a door, usually it’s a good idea to look for the door handles. That’s a point Apple’s lawyers will likely raise in their defense. This case seems like it will have a host of obstacles for the plaintiff to overcome. Discovery should clarify this.

But this case does get you wondering: just what iPhone was the plaintiff “planning to return” when she walked into the doors?

If it was the latest iPhone 4S, you would think that Apple engineers could have tasked Siri with getting shoppers safely in and out of the company’s retail stores. Or perhaps on a more basic level, remind iPhone users to just watch where they are going.

You can read the allegations in the Apple Store customer’s glass door personal injury and negligence lawsuit here, then share your thoughts below.
Complaint (Paswall v. Apple, Inc.)