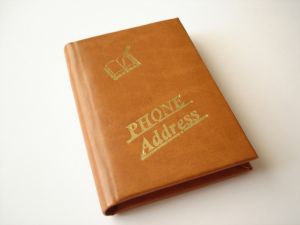 The lawsuit charges that:

Apple’s AppStore has made available for download (and has downloaded to consumers’ wireless mobile devices) in excess of 100 discrete Apps containing code that functions to access, copy and upload to remote systems at least a portion of a user’s wireless mobile device’s address book data without the user’s express prior effective consent.

The class action alleges that Facebook, Twitter, LinkedIn, Rovio (maker of Angry Birds), Foursquare, Electronic Arts, and other defendants deployed “stealth address book data harvesting functionalities” in their mobile applications, and that Apple approved and released these apps in its AppStore.

This chart from Page 46 of the complaint shows the reported date that the defendants apps were first made available in Apple’s Appstore, the Android Marketplace, and Amazon.com’s Appstore for Android: 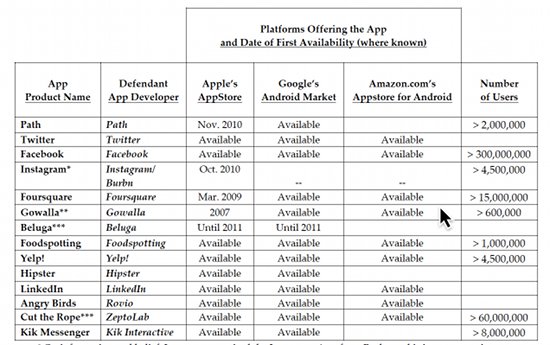 Another chart on Page 49 of the complaint shows that the majority of apps that plaintiffs target are iOS-based; the only Android apps currently targeted by the plaintiffs are for Twitter, Facebook, and LinkedIn.

In an interesting twist, the lawsuit charges that Path CEO and co-founder Dave Morin (the complaint mistakenly calls him ‘Doug’) conceded liability in a February 8, 2012 blog post. Titled “We are sorry,” Morin conceded that the company “made a mistake” by accessing, transmitting, and uploading users’ address book contacts.

The damages sought in the class action could be huge, given the potential number of people using mobile apps listed in the complaint. The plaintiffs seek damages for: