What I Learned From Facebook’s S-1 Registration Statement

Beware of Trolls. Facebook lists patent trolls as a potential risk factor: “[V]arious ‘non-practicing entities’ that own patents and other intellectual property rights often attempt to aggressively assert their rights in order to extract value from technology companies.”

Dislike. If Facebook had a dislike button, China, Iran, North Korea, and Syria would certainly be the target of its disaffection. All of these countries have past or current restrictions on accessing Facebook.

FacebookVille. Last year, Zynga accounted for about 12% of Facebook’s revenue, “which amount was comprised of revenue derived from payments processing fees related to Zynga’s sales of virtual goods and from direct advertising purchased by Zynga.” Since Facebook had revenues of $3.711 billion in 2011, the Zynga-related share was $445 million. That’s a lot of ads or virtual goods.

Dual Class Shares. Following in the footsteps of Google and LinkedIn, Facebook has also adopted a dual class structure. Under this structure, Class B common stock has ten votes per share. Class A common stock, which is being offered in the initial public offering, only has one vote per share.

Facebook Ads. In 2011, almost 85% of Facebook’s revenues came from advertising. If you never click on Facebook ads because you have not found them to be relevant, then you are sharing the wrong information on Facebook. 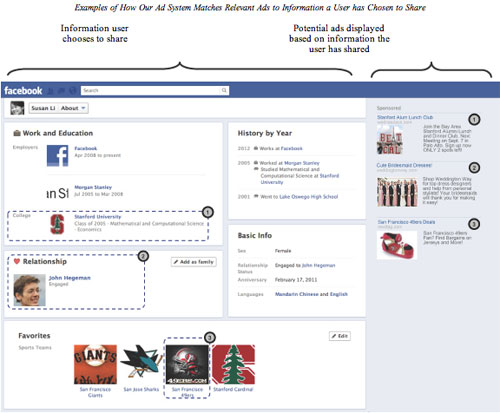