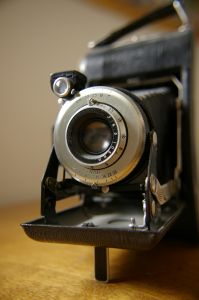 With a Kodak bankruptcy reportedly in the works, the legendary photography business filed patent infringement lawsuits against Apple and HTC today (see below).

Kodak, the designer and builder of the first operating digital camera, alleges that Apple, Inc. is infringing four of its digital imaging patents, and that HTC is violating five of them.

The new case alleges that all of Apple’s iPhones since the 3G and later, iPad Touch, and the iPad 2 violate four Kodak patents involving the transmission of images from either a digital or electronic camera.

Complaint: Eastman Kodak Co. v. Apple, Inc.
Similarly, Kodak sued HTC for violating five of its patents through the company’s handheld communications devices, including, but not limited to, the HTC EVO,” other phones, and tablets.
Complaint: Eastman Kodak Co. v. HTC Corp.
The larger unanswered question is how Kodak’s new patent lawsuits, filed the same day that the company announced that it was restructuring, will affect the technology company’s financial health.