Justia’s Most Popular Onward Posts of 2011 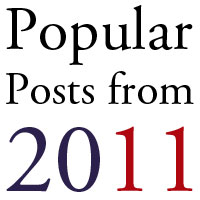 It’s that special time of year, Justia friends, when we look back and share with you the most popular Onward blog posts of 2011.