In Defense of The Bluebook 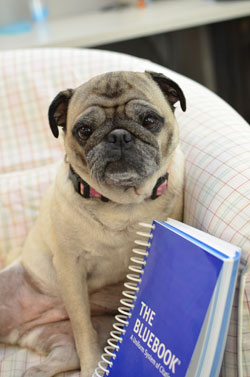 The Bluebook is one of those fixtures—dare I say institutions—that professors, judges, and practitioners love to hate. Judge Posner recently (and famously, as his article “went viral” as much as one can among the online legal community) criticized The Bluebook as “a monstrous growth, remote from the functional need for legal citation forms, that serves obscure needs of the legal culture and its student subculture.” As someone who served as an executive editor of a top law review and whose job encompassed editing every footnote to conform to Bluebook rules, I was simultaneously amused and annoyed upon reading Judge Posner’s scathing diatribe. In my view, The Bluebook is on par with everything else about the law in its current and historic form: an ivory tower of “heretofores” and “thereins” inaccessible to most of those whose will it purports to embody. But more than merely perpetuating that characterization, The Bluebook actually achieves what the rest of the legal world has thus far failed to find—cohesion.

I do not defend The Bluebook’s substance, as it were. Undoubtedly, Table 6 (abbreviations for case names) has become ridiculous, and the interaction between Rules 16.6(f), 18.2.1(a), and 18.2.2 (all attempting to prescribe citation forms that keep up with the exodus of print newspapers and magazines to the Internet) can only be described as confusingly opaque. Indeed, I am loathe to abbreviate “county” as “cnty” per Table 6, and I remain unclear as to why an exact reproduction online of a print article does not prefix the URL with “available at,” given that the entire section on electronic sources would suggest it should. In a recent issue of the California Law Review, I even condoned the willful violation of a Bluebook rule requiring that “communications” be written “commc’ns”—an abbreviation the author rightfully described as “the Ugliest abbreviation EVER.” That said, a rejection of The Bluebook for the absurdity of its substance overlooks its valuable function as a vehicle for teaching meticulousness, precision, and rule-oriented decision making, among other skills lauded in the legal profession. A scholar can certainly write a superb article without once consulting The Bluebook, but an editor who can identify errant commas and inconsistent abbreviations in the footnotes is also more likely to catch typographical and grammatical mistakes in the text. In this way, the ability “to Bluebook” is simply a proxy for other skills. I find it ironic that professionals will scoff at students’ obsession with The Bluebook in one breath and praise these coordinate skills in the next.

Given that The Bluebook does have this instructive function, authors who identify as professors, mentors, and leaders should have no qualms about submitting to what may sometimes (or even often) be a frustrating and seemingly extraneous hurdle to publication. The unique phenomenon that is the law review is as much a pedagogic tool as it is a channel for scholarship. Admittedly, the law review’s editing process entails other components of writing and editing that train students to be lawyers and scholars, but only the Bluebook component is truly unique to law. Our ability to proofread perhaps qualifies us to be administrative assistants; our ability to research and verify facts might earn us positions as research assistants. Though noble professions in their own right, these are not the career aspirations of most law students. The Bluebook is a fraternal bond—a brand, if you will—that has left almost no modern law student unaffected. Despite a departure from its original purpose and function, for which Judge Posner and others have so eloquently vilified it, The Bluebook deserves not (only) our contempt, but our approbation.