Let’s start with General Electric, a company founded in 1892 by Thomas Edison. At the end of last year, the Fairfield, CT conglomerate reported 133,000 employees in the United States and 154,000 in other countries. From the chart below, we can see that in the past decade, GE has transformed from a company where most employees were in the United States to one that no longer is. 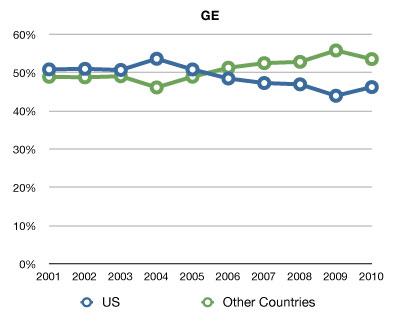 Procter & Gamble, the manufacturer and marketer of Crest toothpaste, Oral-B toothbrushes, Duracell batteries, Pampers diapers, Tide detergent and other popular consumer goods may represent Americana to the rest of the world, but the American workforce has represented less than half of P&G’s employees for some time now. 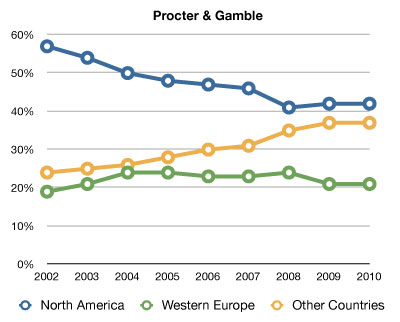 Walmart, the low-cost retailer, has garnered both fans and critics. While it can open stores overseas, it cannot outsource its Walmart Associates to lower cost locales. So, most of its employees are based in the United States for now. 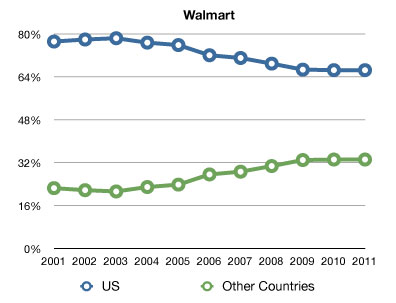 I think the most interesting chart comes from Coca-Cola, where the workforce was predominantly based outside of the United States until recently. 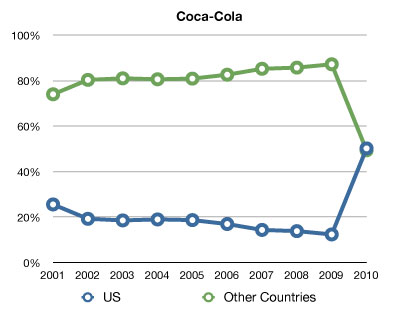 To really understand how the two disparate lines managed to intersect, we have to look at the raw number of employees. 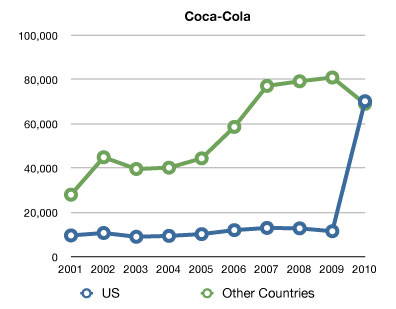 In 2010, Coca-Cola acquired Coca-Cola Enterprises’ North American business, which accounted for the big jump in US headcount. I was quite surprised by Coca-Cola’s concentration overseas until the recent acquisition.

Some people may be concerned about how the pace of outsourcing affects our domestic job losses. I am concerned that some American companies may be less than American when it turns to political advocacy. From looking at some of these conglomerates, it is not readily apparent which ones are “American” and which ones are not. Should we share the same comfort held by the U.S. Supreme Court in Citizens United when it struck down limits on corporate funding for political broadcasts? Would a nominally American company with an overwhelmingly foreign workforce advocate for a position that harms the interest of our domestic workforce or national interest?