I’m sure you’ve heard by now: the government is going to run out of money and “shut down” if Congress can’t agree on a budget before midnight tonight. Yes, Courtney, but how will it affect me? 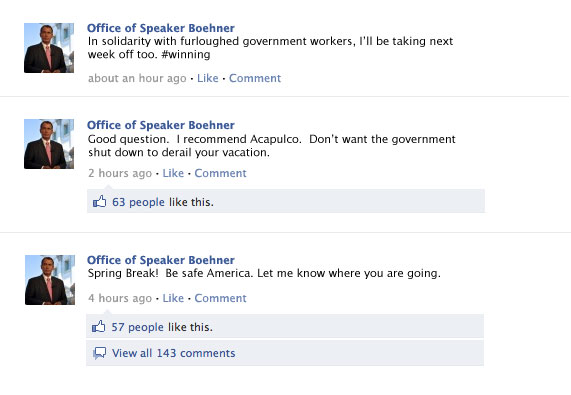 Plenty of outlets are covering how this will affect the general public. Let’s talk about what our readers care about.

According to MSNBC, the courts have enough funding to carry on for 10 days. The USCourts site reports that “If Congress is unable to agree on the continued funding of government before April 8th, the Judiciary is prepared to use non-appropriated fees to keep the courts running for up to two weeks.” Huh, maybe they could dip into that PACER surplus.

AOC tells us that “[o]nce that funding is exhausted, however, the federal court system faces serious disruptions. Following their own contingency plans, federal courts would limit operation to essential activities.”  Jury trials will continue, though jurors won’t be paid, attorneys will continue to work to perform defense services but “payments would be deferred.”

Federal websites will most certainly be affected by the shutdown. According to ComputerWorld, all government run sites except IRS e-filing and essential public safety related sites “likely won’t be updated,” and in some cases, “may go offline.” It’s hard to imagine the latter scenario, though–it’s not like most sites need a continuous operator. It’s possible that the GoDaddy Invoice comes due and the hosting goes down, but it seems like a site should be able to weather a couple weeks of inattention.  It’s unclear how this will affect PACER–is that “essential to public safety”? It’s essential to the continuing function of the federal courts, which handle federal criminal cases. I guess we’ll see what happens.

Of course, the IRS e-filing system will continue to run.  In a moment of unintentional hilarity, an Obama Administration official is quoted as saying “We need to be able to collect the money that is owed to the U.S. government.” Yes, by all means!

Your job is to balance the budget and appropriate funds, right? And you realize that this means you’re not doing it? You’re getting paid despite this colossal failure on your part while thousands of lower level government workers go unpaid and services shut down across the country. Newsflash: no one wants to hear your whining, finger pointing, or hand-wringing. Just make it work, people!

If you are affected by the federal government shut down, commiserate on Facebook with Speaker Boehner.