Online Gambling Legalization Comes to the Forefront in Several States 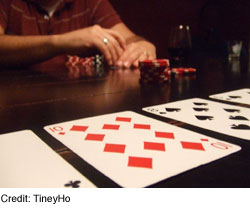 In Iowa, a bill to allow online poker is making progress and will soon be up for a vote before the Iowa Senate. Florida’s bill was given the “double lucky number” of 77, and could pass as soon as July 1. California has two pending bills, and a recent poll showed 66% of the state’s voters were in favor of allowing online gambling, which could create 1,100 to 3,000 new jobs and bring in $100 million per year in tax revenue.

States are in a rush to pass online gambling legislation in anticipation of federal government regulation, which would see the feds taking the tax revenues from online gambling. Nevada’s Senator Harry Reid unsuccessfully attempted to legalize online poker nationally in December. Currently, the majority of Americans who play poker online do so on sites operating outside of US jurisdiction. The Justice Department considers these sites to be illegal and bars US financial institutions from accepting payments from offshore gaming operations. Although the Justice Department hasn’t taken a public position on the recent states’ legislation, its position that online gambling is illegal in the US is longstanding.

State-level legislation is also opposed by many casinos and Indian tribes. Caesars Entertainment, which owns the World Series of Poker, stated in response to New Jersey’s proposed legislation that it opposes legalizing gambling state-by-state because it is hoping for federal regulation, which would be easier for Caesars to manage and be more profitable. Caesars “believes it could gain a 20 percent share of the $5 billion online poker market if it were legalized federally.”

While it seems that much of the support and opposition to legalized online gambling is coming from those with a financial stake in the issue, it’s important to remember that gambling is not just regulated because of the financial aspects. Many professionals who treat gambling addiction feel that access to online gambling could lead to increased numbers of gamblers with a problem.