I Want a Job at Google 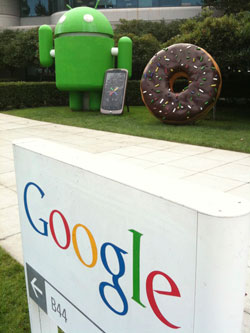 The specific dataset sought by the protesters was the EEO-1 Report, which is filed by all employers with 100 or more employees or certain federal government contractors with 50 or more employees. This report collects the race/ethnic, gender and job categories of employees, and is confidential. The EEOC estimates that this reporting requirement impacts about 45,000 private employers and imposes “599,000 burden hours,” costing respondents $11.4 million and the federal government another $2.1 million–that’s bureaucratese for time and money sink.

The EEOC makes available certain EEO-1 data, aggregated by state, industry and core based statistical area (CBSA). In each report, you can find the number of men and women by job category and race or ethnic group.

For racial groups, the EEOC prefers that employees self-identify their own race or ethnic group. However, when employees decline to self-identify, the employers may “use employment records or visual observation to gather race and ethnic data for EEO-1 purposes.” 70 Fed. Reg. 71294, 71296 (Nov. 28, 2005).

Ironically, the company that launched the Big Brotherish Street View and collected payload data from WiFi networks appears reticent to share its own private data. While Google contends that its EEO-1 data is a trade secret, other companies–including Walmart and Intel–have released their statistics.

Even if the above minority-rights groups were able to obtain Google’s EEO-1 data, I am not sure what use the report would hold for them. One point of contention held by the protesters was that Google disproportionately hires Indians. Since the EEO-1 data does not distinguish Indians from Chinese, Japanese, Koreans, Filipinos, Thai, Singaporeans, Malaysians and Vietnamese, it would be difficult to verify the assertion that these groups seek to prove.

Secondly, while America may not be a completely post-racial society, despite having a Black (or multiracial) man in the White House, American companies have certainly entered a post-national phase. Although Google is firmly ensconced in Mountain View, it also has offices throughout the Americas (Argentina, Brazil, Canada, Chile, Colombia, Mexico, and Peru), the Asia Pacific region (Australia, China, Hong Kong, India, Japan, Korea, Malaysia, New Zealand, Singapore and Taiwan), as well as Europe (Austria, Belgium, Czech Republic, Denmark, Finland, France, Germany, Greece, Hungary, Ireland, Italy, Netherlands, Norway, Poland, Portugal, Romania, Russia, Spain, Sweden, Switzerland, Turkey, Ukraine, and the United Kingdom), the Middle East (Egypt, Israel and United Arab Emirates) and Africa (Kenya and South Africa). So, any assertion that Google should be hiring “locals” over “foreigners” is seriously misguided, shortsighted and not to mention hypocritical. Advocating that a global employer hire based on nationality instead of merit is a double-edged sword because the nationality the company selects just might not be yours.

The other issue I take with the protesters is their abject passivity. Staging a media circus to protest Google’s refusal to release confidential data speaks to their sense of entitlement, but it is entirely at odds with the spirit of Silicon Valley. True activists will secure the necessary data without waiting for Google’s munificence. LinkedIn lists over 26,000 Google employees. If these activists will spend 20 percent of their time assembling an inventory of Google’s employees, they can prepare a demographic breakdown of Google’s workplace on their own. Alternatively, they can set-up their own Street View booth outside Google to tally the race and gender of all who enter to obtain a proxy of Google’s demographics. Be the solution. Don’t be the problem.