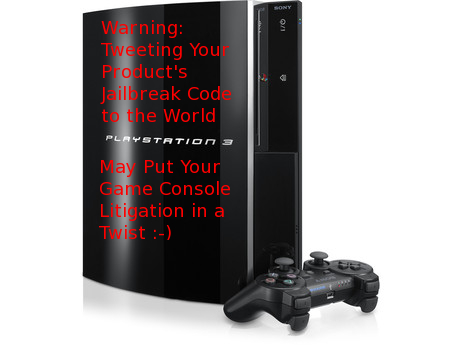 We’re guessing that Sony has its PS3 controllers in a twist today. Sony has been on a legal warpath against PS3 hackers, who figured out and shared the game maker’s jailbreak code. But all that changed yesterday.

That’s when Long Island geek Travis La Marr tweeted Sony’s PS3 jail break code to @TheKevinButler, a twitter account run by Deutsch, the ad agency that Sony hired to run its PS3 campaigns. Kevin Butler is the name of a geeky character who appears in PS3 commercials. It seems that the person managing Butler’s tweets at the ad agency RT’d La Marr’s tweet, include the PS3 jailbreak code, to the world.

You would think that Sony’s legal team would have sent a legal memo or two to the company’s other PS3 hired guns about what not to do during litigation. Let’s say, for example, not tweeting anything remotely confusing with the potential to hurt your client’s case.

The funny thing is that La Marr doesn’t even own a PS3. He told PC Magazine that he posted the jailbreak “to encourage hardware freedom…. I didn’t post the key to condone piracy in any way.”

But Sony’s lawsuit over PS3 hacks may very well have been rendered moot by the company’s own carelessness.