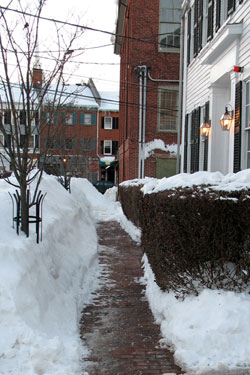 I know we’re all aware that the Northeast has a lot of snow – and I mean, a lot of snow. What you may not have heard of though is a decision that came down from the Massachusetts Supreme Judicial Court this past July which overturned over a century of law regarding snow and ice removal.

Previously, property owners could escape liability if they did not remove “natural” accumulations of ice and snow from their property. Papadopoulos v. Target Corp. abolished this distinction between natural and unnatural snow and ice accumulation. Landowners must now apply the same obligation of reasonable care to this type of hazard as they would to other hazards on their property.

All’s well on paper, but I was curious during a trip to Boston over the weekend to see if the new rules would make any kind of a difference walking around town (as an aside, lying on the ice Saturday night, having fallen in a puddle of of the slushy slippery stuff, I wondered if maybe I had taken my research just a tad too far). The bottom line: even with more people out shoveling early and often, I’m not sure their efforts are any match for this Winter and we’re bound to see an early Spring of personal injury lawsuits.

Update: For those of you interested, you can listen to the Lawyer 2 Lawyer episode Bob mentions in his comment below here.