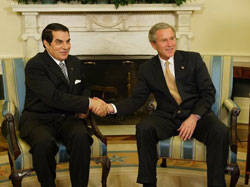 The events in Tunisia unraveled quite rapidly. Before most of us even had a chance to look up Tunisia on Google Maps, President Obama had already picked sides in the conflict. In his Statement on the Events in Tunisia, the President stated:

I condemn and deplore the use of violence against citizens peacefully voicing their opinion in Tunisia, and I applaud the courage and dignity of the Tunisian people. The United States stands with the entire international community in bearing witness to this brave and determined struggle for the universal rights that we must all uphold, and we will long remember the images of the Tunisian people seeking to make their voices heard. I urge all parties to maintain calm and avoid violence, and call on the Tunisian government to respect human rights, and to hold free and fair elections in the near future that reflect the true will and aspirations of the Tunisian people.

As I have said before, each nation gives life to the principle of democracy in its own way, grounded in the traditions of its own people, and those countries that respect the universal rights of their people are stronger and more successful than those that do not. I have no doubt that Tunisia’s future will be brighter if it is guided by the voices of the Tunisian people.

I am surprised that Obama’s usual chorus of critics didn’t pounce on his obvious misstatement. The “entire” international community didn’t exactly view this as a brave and determined struggle. In fact, the French foreign minister was offering technical assistance in riot control. That Obama. If it’s not one thing, it’s another.

Besides, how could Tunisia have not been holding free and fair elections all these years? After all, on his first state visit to the United States, the U.S. Senate offered the following resolution to President Zine el Abidine Ben Ali:

Whereas the United States and the Republic of Tunisia share a common bond of friendship in the pursuit of democratic values;

Whereas the Government and the people of Tunisia share with the United States the ideals of freedom, peace, democracy, and progress;

Whereas the United States has recognized the peaceful succession of President Zine el Abidine Ben Ali and supports his commitment to and progress on constitutional reforms and political democratization;

Whereas the United States applauds President Ben Ali’s concern for human rights and political freedoms as demonstrated by the release of political detainees;

I know, I know. If you are going to invite someone over to your house, don’t piss on the hors d’oeuvres. I guess you have to take the pretensions of Congress with a grain of salt. Just because you chant the word democracy multiple times, it doesn’t make it true.

If you are shocked at the speed of change overtaking the Middle East, consider how social media can accelerate your own efforts. If you want to promote your law practice, launch your own marketing revolution by integrating Twitter or Facebook into your campaign. Connect with people who share your interests, stay mobile, stay lean, and don’t believe for one second that flushing money down the drain is a sound strategy for tackling any problem, or I just might have some swampland in Iraq to sell you.