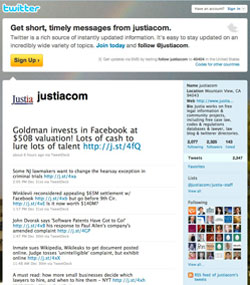 Happy New Year to all our Justia friends!

As Courtney wrote in her year-end review, one of the big trends of 2010 was the emergence of social media and its integration into the work of legal professionals. While I’m sure many of our readers may already have a blog, a Facebook page, LinkedIn Profile or Twitter account (to name but a few of these types of tools and platforms), many folks may still feel a bit unsure how this all works. For that latter group, we’re going to post articles on Onward throughout the year that provide basic social media “how-tos” and resource links to help you get started. This post is going to focus on Twitter and also briefly cover Justia’s Twitter community Legal Birds – a place we hope that those of you who are already in the social media mix might join up and participate in.

Twitter is sometimes called “micro-blogging.” It’s a forum where, once you sign up for a free account, you can post short “status” messages of 140 characters or less. Twitter has become a great way to connect with your colleagues (both old and new), share resources and news, ask questions related to the law and find out what people are thinking and talking about within the practice areas of interest to you. To see an example of how this works, check out Justia’s Twitter page where you’ll see a variety of posts that list headlines and links to law-related news and information. Signing up for Twitter allows you to “follow” (see more about that below) users you are interested in via a feed where you can see what they have posted, or “tweeted”, in real time.

Below are a few articles to learn more about lawyers, law firms and Twitter:

Starting out on Twitter can sometimes be a little confusing as you’ll find the community has it’s own vocabulary and etiquette. One of the best places to start to learn more about all of this is Twitter’s “Twitter Basics” page where you can read up on a variety of topics including how to manage your account, find people, post messages and more.

Tweet – A tweet in Twitter-world can be a noun or a verb. For the former, it refers to the messages your post, as in “Did you read Tim’s latest tweet?” The former describes the actual act of posting itself, e.g., “We should tweet this.”

Following and Followers – When you look at your Twitter page, you’ll note there’s a place on the page which keeps count of who you are following and who are your followers. As noted above, you can track tweets by “following” different people – when you find someone you’d like to follow on Twitter, just click on the icon to the right of their name (it’s hard to miss), to add them to your follow list. When you decide to follow someone, he or she will receive a notice that you have done so via email. The Follower count on your Twitter page tells you how many people are following you – to see who these people are, click on the link – you also have the option when looking at this list to follow those folks as well.

Hashtags # – The hashtag in Twitter “#”, a convention created organically by users, is a way for you to track tweets by topic vs. individual account holders. For example, one of the things I’m interesting in is free law. When a person tweets something on that topic, he or she can elect to put in the hashtag “#freelaw” which in turn allows me to more easily find tweets in that category. Here’s a recent tweet from Courtney where she uses that particular hashtag which allows you to see what a typical tweet looks when hashtags are inserted, “The wonderful world of public domain citations http://j.st/4TE I love it so much, I wrote a blog post about it! #freelaw.”

The “@” sign – When looking at different tweets, chances are you’ll see this sign all over the place. It’s used to call out usernames in tweets and helps you to recognize folks in your tweets as the original source of a particular story, idea, etc. I use this a lot when I read something online that I think is worthy of noting, e.g., “@oreillyradar “2010 Gov 2.0 Year in Review” – includes #lawgov http://j.st/4Nt” (Note the hashtag #lawgov as well, which refers to Law.gov.) A great feature of using the @ sign is that when a username is preceded by one, it becomes a link to a Twitter profile.

Re-Tweets or “RT” – See a tweet you think is worth mentioning to the folks who follow you? You can re-tweet or “RT” it by clicking on the Retweet link under it – Twitter automatically creates a new tweet for you which you can then elect to send it out to all your followers. Do note that sometimes re-tweeting will cause a post to go over the 140 character limit – in that case, you may need to edit it a bit and ‘MT’ it — a term applied to a modified tweet.

DM — Lots of folks engage in conversations via their tweets which everyone can read, but sometimes you may want to privately reach out to a user. In that case you can direct message or DM them. Learn more about DMs.

Link or URL Shorteners – It’s great to link to different web pages in a tweet, but we all know that sometimes URLs can be pretty long. When you only have 140 characters to work with, you’ll want to shorten the URL so you have space for your actual tweet. There are several different tools you can use to do this, like bit.ly or Tiny URL. Learn more about URL shorteners.

Once you get up and running on Twitter, you may want to use a dashboard or other browser that lets you manage multiple accounts, create sub-groups and also integrate other social media accounts like Facebook and LinkedIn. There are several different companies out there that provide these services – to see examples, check out Hootsuite and Tweetdeck.

We encourage any soon-to-be and current Twitter users who haven’t already done so to join Justia’s community of Legal Birds – a directory of legal tweeters and their tweets. Legal Birds tracks top tweeters, allowing you to additionally filter this by lawyers, law librarians, and academics. We also break down tweets by category and practice area – you can subscribe to these feeds and rank them by different criteria, e.g., community connections, all followers, etc. Lawyers who have claimed their profile in Justia’s Lawyer Directory may incorporate their Twitter feed into their profile as well. Read more about Legal Birds here.