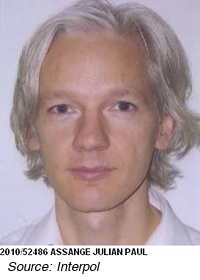 Reports then maintained that Wikileaks moved to a Swiss domain (Wikileaks.ch), hosted by French telecom OVH, with mirrored sites elsewhere.

Then, in rapid succession, PayPal, Visa, and MasterCard refused to process micro-payment donations around the world to keep the site alive. The site reportedly relies upon some 200,000 Swiss francs annually to operate. 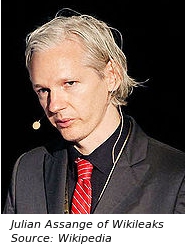 Assange’s Swiss bank account was closed after the Swiss PostFinance bank concluded that he “provided false information regarding his place of residence during the account opening process.”

On Tuesday, a British judge rejected a bail request by Assange’s lawyer, concluding that not only was Assange a flight risk, but also that he “may be at risk from unstable persons.”

While the U.S. government is concerned about the quantity and quality of documents unearthed by Wikileaks, they have not legally been able to stop information flowing from either it or the journalists who have analyzed and reported on disputed documents.

Apparently seeking to deflect blame from its own inability to lockdown internal documents, the White House reminded federal agencies and their contractors that they:

“are obligated to protect classified information pursuant to all applicable laws, as well as to protect the integrity of government information technology systems.”

In other words, don’t leak any more secret documents to Wikileaks. This warning convinced the Library of Congress to deny Wikileaks access to employees and any members of the public using computers in the LOC’s reading rooms.

Some computer security professionals are asking different questions: What exactly were the tech bosses at DOD and State doing about data loss prevention, and why haven’t they been fired?