My friends and coworkers know that I’m a big fan of J.K. Rowling’s Harry Potter series. This year, interest in the boy wizard and his world was heightened by the spring opening of the Wizarding World of Harry Potter at Universal Orlando. (That’s me and my wife with the Conductor of the Hogwarts Express). Dozens of new Harry Potter toys and trinkets are available for purchase this holiday season. And, Harry Potter fans will be lining up tonight at their local cineplex to attend the midnight opening of Harry Potter and the Deathly Hallows: Part I.

In Deathly Hallows, Harry Potter finds himself Undesirable No. 1, a fugitive of the law, as the government of the Wizarding World has been taken over by the evil Lord Voldemort. This is not the first time that Harry has found himself at odds with Wizarding Law. In honor of the movie, I am going to look at the laws and legal system of Harry’s world. So, let’s hop aboard the Hogwarts Express to take our introductory course in Wizarding Law at Hogwarts.

The head of the Ministry is the Minister for Magic. The Minister is an elected official, but does not seem to be subject to term limits. A minister may be removed from office, as was seen when Cornelius Fudge was removed some time between Order of the Phoenix and Half-Blood Prince.

The ministry is composed of at least seven departments. Some early Rowling sources mention additional departments, which are not accounted for in Order of the Phoenix, when Harry visits the Ministry of Magic for the first time.

Rather then having a separate legislative body like the United States, Magical Britain seems to follow an administrative law system with most of the laws coming in the form of regulations from the various departments. For example, the Muggle Protection Act was partially written by Arthur Weasley as the head of the Improper Use of Magic Office.

The most important law in the magical world is the International Statute of Secrecy, which was passed by the International Confederation of Wizards in 1692. This statute directs that the Wizarding World be kept secret from the non-magical community (Muggles) and most other laws in the Wizarding World stem from this statute. A few years later, the Warlock’s Convention of 1709 added a number of other restrictions meant to further that goal, including the outlawing of Dragon Breeding.

The two laws that seem to give Harry the most difficulty are the Statute of Secrecy and the Decree for the Reasonable Restriction of Underage Sorcery (1875). In the Chamber of Secrets and Order of the Phoenix, Harry finds himself in situations where magic occurs in the presence of a muggle (and while he is under age). As a result, Mafalda Hopkirk of the Improper Use of Magic Office issued Harry a written warning, even though a house elf, and not Harry, performed the magic. Later, Harry appears before a formal hearing in front of the Wizengamot (Wizarding Court, more on that in a moment) for protecting his Muggle cousin from attack by dark creatures known as Dementors. 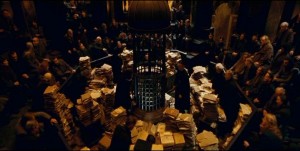 The high court of Wizarding Britain is known as the Wizengamot. A panel of wizards and witches (collectively known as the Wizengamot or sometimes the Council of Magical Law) preside during trials (and at least one hearing) in one of the courtrooms on Level 10 of the Ministry of Magic. Harry witnessed three trials through memories of Albus Dumbledore, who was Chief Warlock of the Wizengamot for much of time that Harry knew him.

It is not known if lower courts exist and the Wizengamot constitutes a sort of Supreme Court of Wizarding Britain, or if this is the only court system. It seems like the latter is the case, as the Wizengamot summot Harry directly for a hearing (even though this is remarked as being quite uncommon).

The Wizengamot Charter of Rights grants the accused the right to call witnesses and be represented by another person, although the books do not mention any lawyers. Fortunately for Harry, Dumbledore represented him and argued his case well enough that Harry escaped severe punishment.

The Improper Use of Magic Office issues a written warning to underaged wizards who conduct magic on their first offense. A second offense results in the expulsion of the wizard from school, the destruction of his wand, and the wizard is no longer allowed to use magic. This punishment seems to apply to other infractions of underaged crime as well, as Rubeus Hagrid was expelled from Hogwarts in his third year, and his wand destroyed, prohibiting him from using magic for the rest of his life.

Serious crimes result in imprisonment at Azkaban. Azkaban is a fortress on an island far out in the North Sea guarded by Dementors, which are dark creatures who suck all of the happiness out of a room like it was air, leaving people with only their darkest, most horrible memories of their lives.

An even more severe punishment is the Dementor’s Kiss. Sirius Black was sentenced to this punishment withhout the benefit of a trial. However, Harry saved him from this terrible fate. In a Dementor’s Kiss, a Dementor clamps its jaw on the mouth of the victim and sucks out his soul, leaving him alive, but completely “gone.”

I hope you have found it entertaining to read this synopsis of the legal system of the wizarding world. I can write, quite a bit more, especially on the apparent lack of due process in the wizarding world, but I felt since this article is written in celebration of the release of Deathly Hallows Part I, I’ll leave with a glimpse of how the legal system will have changed in the beginning of this last chapter of Harry’s journey.

In the beginning of Harry Potter and the Deathly Hallows, Voldemort seizes control of the Ministry of Magic in a coup. He wastes no time in issuing a warrant for Harry Potter, who is labeled “Undesirable No. 1.” The only reason Harry isn’t wanted “Dead or Alive” is because Voldemort wants the privilege of killing Harry himself. Hermione and Ron are not as lucky and can be taken either way.

Meanwhile, Delores Umbridge, an old nemesis of Harry from Order of the Phoenix, enjoys a high position in Voldemort’s new Ministry of Magic. She rounds up muggle-born wizards as part of “The Muggle-Born Registration Commission” to interrogate them, and threaten them with the Dementor’s Kiss for no crime other then being born to muggle parents.

It is into this chaotic world that we will find ourselves early in Harry Potter and the Deathly Hallows: Part I, opening tomorrow in theaters in the United States.

UPDATE 2010-12-09: Professor Kelly Collinsworth of Morehead State University comments below that she will be teaching a class about this very subject next spring. In addition the class will compare law school with Hogwarts, should be a very interesting class.