Minnesota’s Crime Against Swine: Lax Enforcement Runs a Fowl of the Law 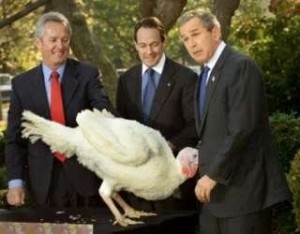 Thanksgiving is nearly upon us.  A time for being thankful, eating turkey or tofurkey, cranberry sauce, yams, and pumpkin pie.

In Minnesota, the Land of 10,000 Laws, this is a time when Minnesotans had better be on their best behavior when it comes to how their treatment of livestock.

You see, under Minnesota state law, turkey and chicken scrambles are patently illegal.  We’re not talking about scrambled eggs here.  Section 343.36 of the Minnesota Code outlaws ‘turkey scrambles,’ defined as when a “turkey is released or thrown into the air and wherein the object is the capture of the chicken or turkey.”

What exactly gets scrambled when turkeys and chickens are released in the air?  Do they get indigestion?  Do they get dizzy like kids who spin themselves and their friends silly on playground merry-go-rounds (a perfectly legal activity in Minnesota)?  Does the their ability to think straight get a little too gobblery, what with all the brief, momentary period of flying to and fro?

We’re guessing the legislative history on the matter has more to do with quashing a mad rugby-like scrum of folks scrambling after frisky fowl in frat-like brouhahas. 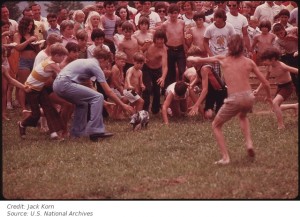 No person shall operate, run or participate in a contest, game, or other like activity, in which a pig, greased, oiled or otherwise, is released and wherein the object is the capture of the pig…

Although such precarious porcine chases are a no-no, that hasn’t stopped Minnesotans from engaging in rampant lawbreaking. Here’s a list of some greased pig lawbreaking incidents.

Minnesota’s lax law enforcement of its citizens crimes against swine is deeply troubling, and infuriating to 49 other law-abiding states.

We hope that Minnesota lawmakers will think twice about declining to enforce the state’s law designed to protect swine from Minnesota crime.

Although President Obama is expected to issue an official Presidential Pardon for a turkey that ran a fowl of the law, we don’t believe that Minnesota pigs will be inclined to do the same for the Gopher-loving peeps.