Veterans Day: Honoring Those Who Served 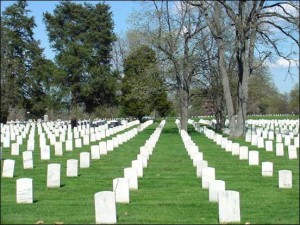 As we go about our routines on Veterans Day today, we should take time to remember the men and women in our communities who served with the U.S. Armed Forces. Their commitment to serve our country at home and abroad protects the Constitution for all of us.

We owe veterans our compassion, our understanding, and our support for doing what others choose not to: put themselves in harms way to protect our freedoms.

Veterans Days was signed into law by President Calvin Coolidge after the U.S. Congress passed this resolution on June 4, 1926 to make it a legal holiday:

Whereas the 11th of November 1918, marked the cessation of the most destructive, sanguinary, and far reaching war in human annals and the resumption by the people of the United States of peaceful relations with other nations, which we hope may never again be severed, and

Whereas it is fitting that the recurring anniversary of this date should be commemorated with thanksgiving and prayer and exercises designed to perpetuate peace through good will and mutual understanding between nations; and

Whereas the legislatures of twenty-seven of our States have already declared November 11 to be a legal holiday: Therefore be it Resolved by the Senate (the House of Representatives concurring), that the President of the United States is requested to issue a proclamation calling upon the officials to display the flag of the United States on all Government buildings on November 11 and inviting the people of the United States to observe the day in schools and churches, or other suitable places, with appropriate ceremonies of friendly relations with all other peoples.

While federal and state governments honor living and departed veterans today, some go a little bit further. The Iowa Legislature passed a law this spring that requires all employers to give veterans a legal day off on Veterans Day.

Let us pause and reflect on the late President John F. Kennedy’s attendance at a Veterans Day ceremony at the Tomb of the Unknown Soldier in Arlington National Cemetery on November 11, 1963.

Tragically, President Kennedy would join his fellow fallen soldiers at Arlington several weeks later, buried alongside departed soldiers only eleven days after he was assassinated in Dallas, Texas.