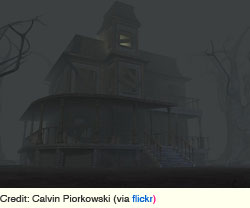 Halloween is almost here–time to resurrect the ghosts of First Year Property Law past. . . with Stambovsky v. Ackley. This was my favorite case in law school, and I think about it every time I watch Ghost Hunters or Paranormal State. In a professional context, of course–don’t these people know what they are doing to their property values?! Who wants to disclose that their house was on a ghost reality show?

Stambovsky, as you may remember, attempted to rescind a housing sale contract on the grounds that the defendant seller failed to disclose to plaintiff buyer that the house was haunted. Because the seller publicized the “hauntings,” the house had a negative reputation in the community which affected the value of the home. Plaintiff, who did not live in the area, had no way to discover this reputation and the Court found an exception to the general rule of caveat emptor in real property contracts. It held that “as a matter of law, the house was haunted.” Stambovsky v. Ackley, 169 AD 2d. 254, 256 (New York App. Div. Dept. 1 1991). The opinion is full of colorful language:

“Plaintiff, to his horror, discovered that the house he had recently contracted to purchase was widely reputed to be possessed by poltergeists” (Id. at 256)

“Applying the strict rule of caveat emptor to a contract involving a house possessed by poltergeists conjures up visions of a psychic or medium routinely accompanying the structural engineer and Terminix man on an inspection of every home subject to a contract of sale.” (Id. at 257)

“In the interest of avoiding such untenable consequences, the notion that a haunting is a condition which can and should be ascertained upon reasonable inspection of the premises is a hobgoblin which should be exorcised from the body of legal precedent and laid quietly to rest.” (Id.)

“Finally, if the language of the contract is to be construed as broadly as defendant urges to encompass the presence of poltergeists in the house, it cannot be said that she has delivered the premises “vacant” in accordance with her obligation under the provisions of the contract rider.” (Id. at 260)

Judge Rubin even quotes the Ghost in Hamlet: “Pity me not but lend thy serious hearing to what I shall unfold” (William Shakespeare, Hamlet, Act I, Scene V [Ghost]).” (257)

You just know that the judge (or clerk, more likely) had a great time writing the opinion. For those of you who are now interested in court treatment of “stigmatized property,” check out this law review article that I dug up on Google Scholar.

A co-worker points out that Nyack, where the haunted house is located, is right across the Hudson River from Sleepy Hollow. Also? 112 Ocean Ave, in Amityville, NY, the site of the infamous Amityville Horror (which was haunted by its own litigation) is only an hour away.

Finally, I’ll leave you with this image: 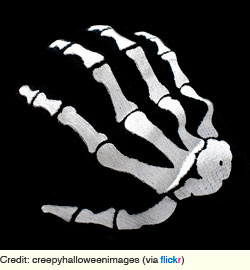