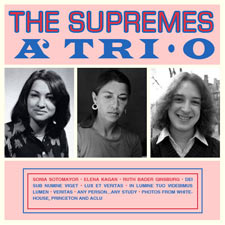 On this day in 1966, the Supremes became the first all-female music group to attain a No. 1 selling album: The Supremes A’ Go-Go.

This little piece of trivia made us think of the “Supremes” of the legal world: the Justices on the Supreme Court of the United States. This term, for the first time ever, female justices compose one-third of the bench, and have the potential to contribute significantly to the Court’s jurisprudence. Many reporters have already speculated on how these female justices may shift the direction of the court and affect certain decisions.

Seriously though, there is a point to be made about the advancement of women in all areas of society over the past couple of decades. For me, the Supremes are synonymous with Motown–big hair, glamorous dresses, and beautiful harmony. But they were also successful trailblazers. The women who started the Supremes were local girls from Detroit who grew up in a housing project. After the famous Barry Gordy of Motown picked up their group, their rise to fame began. Originally called the “Primettes” (after the male group the “Primes” who later became the Temptations), Gordy told them to select a new name. When they chose “the Supremes,” Diana Ross resisted, thinking the name was “too masculine”–an interesting comment on the times.

According to Wikipedia, the Supremes “were the most commercially successful of Motown’s acts and are, to date, America’s most successful vocal group with 12 number one singles on the Billboard Hot 100.” They broke racial, gender, and socioeconomic barriers to reach the pinnacle of the music industry.

Similarly, we have arrived at a moment where the Supreme Court now more accurately reflects the American populace, with women, an African American, a Latina, and several Catholics serving on the bench. As for the gender balance, commentators point out that three is often the “magic number” when it comes to female board memberships. Justice Ginsburg has been outspoken about adding more female justices:

The major difference is going to be the public perception of where women are in the justice system…. The three of us, we are here to stay…. When the schoolchildren file in and out of the court and they look up and they see three women, then that will seem natural and proper – just how it is.

With women making up 44% of new law school students , it’s great to see the gender composition of the Court more reflect that of the legal industry. Of course, the growing influence of women in law and politics can’t stop the press from focusing on their appearance–cf. the “Doily Debate.”

Side note: Ginsburg, Sotomayor, and Kagan are all from NYC’s boroughs… three local girls made good 🙂