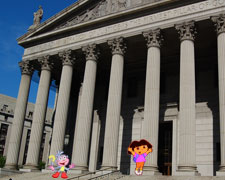 Last week, Caitlin Sanchez, the voice of Dora the Explorer, sued MTV Networks and Nickelodeon/Viacom Consumer Products, Inc. In her complaint filed with the Supreme Court of the State of New York in the County of New York, Sanchez alleged that she was swindled out of millions in “promised compensation for merchandi[s]ing, re-runs (also known as ‘residuals’), promotional work and recordings.”

Sanchez accused Nickelodeon and Nickelodeon Consumer Products of colluding with her talent agency Cunningham-Escott-Slevin-Doherty Talent Agency, Inc. and her agent Jason Bercy to induce her to sign an allegedly unconscionable contract “with convoluted, vague, incomplete, and misrepresented terms.”

Illinois Law dean Vikram David Amar describes some of the advantages of the in-person setting for law schools (as compared to remote instruction) as an explanation for why he is looking forward to the start of the fall semester being in person.