App of the Week: PocketJustice puts the Supreme Court in Your Pocket 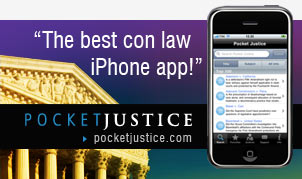 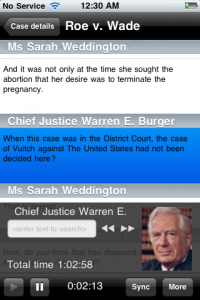 By far, the most impressive feature of the app is the ability to listen to oral arguments from many of the cases available, even in the free version, with full transcripts.  In cases where the transcript is available, there is a great feature that Jerry Goldman of Oyez calls “Flip. Tap. Listen.”

Both versions also contain summaries of all of the cases available in the app, including how each justice voted, bios of all of the Supreme Court Justices, and a quick “Lawyers” button to find a lawyer in the Justia Legal Services & Lawyers Directory.

When asked about the difference between different versions, Goldman answered, “The basic (free version) includes information on the most popular cases used in con[stitution] law courses based on a survey of con law casebooks. The full version represents every case we could find in any of the con law books we surveyed. I get occasional requests to add cases. As long as the requested case can be found excerpted in a con law casebook still in print, I will add it to PJ-Full.”

He also let slip some details about the upcoming iPad version.

While no specific timeline was available at print for when the iPad version will be available, Goldman says to expect it at “the end of the year, or 2011 Q1.”

You can find both the free and full versions of PocketJustice in the iTunes App Store. For updates on the progress of the iPad version and updates to the existing version, you can follow @PocketJustice on Twitter, Fan them on Facebook, or visit PocketJustice.com. And be sure to visit the Oyez Project, which makes this fantastic app possible.

Lawyers, if you would like to support the Oyez project, be sure to claim your profile on the Justia Legal Services & Lawyers Directory and purchase the Oyez Supporter Badge for your profile.  Doing so will help support Oyez’s projects including PocketJustice and their Supreme Court multimedia archive, and in turn will give you a higher placement listing in the Oyez Lawyer Directory.